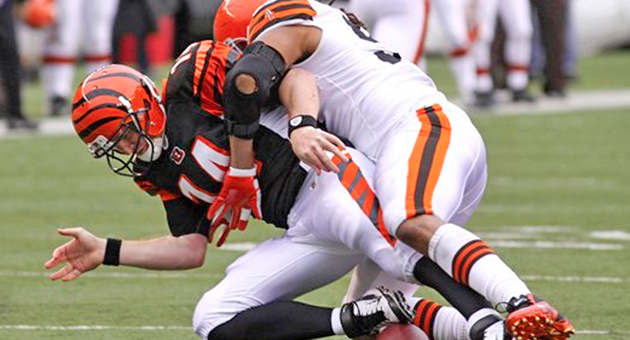 Cincinnati Bengals quarterback Andy Dalton (14) fumbles as he is sacked by Cleveland Browns defensive end Jabaal Sheard during the first half of an NFL football game on Sunday in Cincinnati. Cleveland recovered the fumble. The Bengals rallied to win 23-20. (The Ironton Tribune / Courtesy of The Cleveland Browns)

CINCINNATI — A.J. Green’s bruised knee kept him on the sideline for the final minutes of Cincinnati’s past two games, when the Bengals came up just short against AFC North rivals.

Finally up-and-running on Sunday, the rookie receiver made all the difference in the final minute.

Green made a leaping catch across the middle of the field and kept going for a 51-yard play, setting up a field goal that rallied the Cincinnati Bengals to a 23-20 victory over self-destructive Cleveland.

The surprising Bengals (7-4) stayed right behind Baltimore and Pittsburgh in the AFC North with another second-half comeback forged by their rookie big-play combination.

“I like my chances with A.J.,” rookie quarterback Andy Dalton said. “You just put it around him and he makes plays. He’s a special player.”

The Browns blitzed on third-and-8, and Dalton threw it down the middle just before he got hit. Green adjusted, leaped high above cornerback Joe Haden for the catch at the 30-yard line, then kept going until he was pushed out at the 2.

“That’s why he was the fourth pick in the draft,” coach Marvin Lewis said. “He’s the best first-round draft pick I’ve ever been around. He continues to amaze me. He’s a phenomenal athlete.”

Cincinnati’s turnaround season started in Cleveland, where the Browns failed to line up promptly and were surprised by a quick snap that led to Green’s uncontested 41-yard touchdown catch.

That one was easy. This one was amazing.

“I did play basketball when I was younger,” Green said. “It’s like rebounding. A lot of it just timing and going up strong.”

Green’s game-turning play gave him 110 yards against the Browns, who along with the Steelers had been the only teams in the NFL that hadn’t allowed a 100-yard receiving game.

“It was an amazing catch that won the game for them,” Browns quarterback Colt McCoy said.

And a gut-wrenching gaffe set it up.

For the second time in three games, a botched snap cost Cleveland an opportunity to take a late lead. Phil Dawson was well short on a 55-yard try with 1:51 left after the snap skipped along the ground.

Dawson had already connected from 32 and 54 yards, his longest field goal of the season. On this one, he never had a chance.

Only weeks earlier, the Browns had the same thing happen. A bad snap caused Dawson to miss a 22-yard kick with 2:13 left, allowing St. Louis to close out a 13-12 win in Cleveland.

It was a familiar outcome for the intrastate rivalry — Cincinnati has won 12 of the past 15 games and six of seven at Paul Brown Stadium. Only 48,260 showed up at the 65,500-seat stadium to see a game decided by the bad snap and the great catch.

It was the third time that the Bengals had overcome a halftime deficit of at least 10 points to win, tying the league record for a season. The 1980 Chiefs, 1984 Patriots, 1986 Colts and 2011 Lions also had three such comebacks.

Cleveland was buoyed by the return of running back Peyton Hillis, who missed the past six games with a strained left hamstring. He carried 19 times for 65 yards, helping the Browns put together long drives and score 20 points for only the second time all season.

Down 20-10 late in the third quarter, Dalton helped the Bengals get a win that kept them in the thick of the playoff chase. He was 21 of 31 for 270 yards and his 16th touchdown pass of the season, topping Greg Cook for the Bengals rookie record. Cedric Benson carried 21 times for 106 yards, his second 100-yard game against the Browns.

McCoy was 16 of 34 for 151 yards with a pair of touchdowns. His fourth-down pass was knocked away at midfield with 10 seconds to go, sealing Cincinnati’s win.

McCoy’s 24-yard pass to Jordan Norwood capped Cleveland’s opening drive and gave the Browns their first touchdown in the first quarter all season. They’d managed a total of nine points in the opening quarter until then.

The good start was followed by another crushing finish.

Notes: Browns LB Scott Fujita likely broke his right hand in the fourth quarter but expects to keep playing. The Browns also had injuries to DL Emmanuel Stephens (strained chest muscles) and second-string LB Kaluka Maiava (knee). … McCoy’s TD pass to Greg Little made it 17-7 at halftime, more points than the Browns had scored in any of their past five games. Little dropped numerous passes, including one on Cleveland’s last possession. … Green’s third 100-yard game tied the club rookie record, shared by Isaac Curtis (1973) and Eddie Brown (1985). … The Bengals lead the intrastate series 41-36.