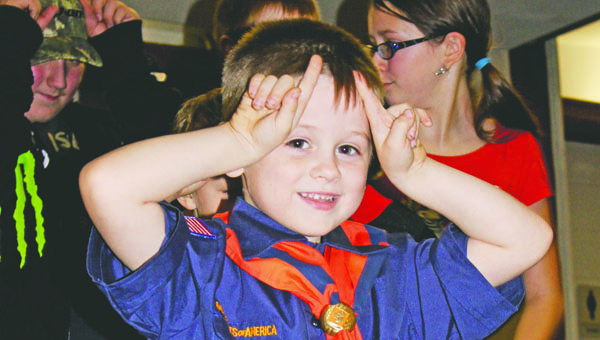 Julian Sharp, 6, a Tiger cub, does the Buffalo Dance during Saturday’s Pow wow with members of the Ani Tsagli, meaning “many Cherokee.”

Moving their feet to the beat of the drum, more than three dozen local Boy Scouts participated in a Native American drum circle on Saturday at the First United Methodist Church in Ironton.

Led by members of the Otway-based Ani Tsagli or “Many Cherokee,” group the Scouts learned about the native culture through traditional songs and stories performed for them. Performances included the traditional Cherokee welcome and morning songs, as well as a Buffalo Dance, which the children and adults were taught to dance to.

The group also sang “Amazing Grace” and recited the Lord’s Prayer in the Cherokee language, known as Kituwah.

Tammy, whose Cherokee name translates to “Spirit Bird,” is the group’s speaker. She said the group hopes to dispel some of the negative stereotypes children are taught about Native peoples by letting them interact with Indians.

“Children end up with such negativity about who we are because of what they read and what they are told,” she said. “They don’t understand. If we let them know we are people too, it’s going to make a change for our children to come, so there is not that prejudice,” she said. “Our goal is to let people know that we are not so different from them. We all put our pants on one leg at a time.”

John Rockwell, whose Lakota Sioux name is Wanbli Topa, or Four Eagles, is also a member of the group. “I grew up around a lot of Cherokee people although my father taught me the Lakota way,” he said.

“We like to share things about ourselves and about our culture with the children and the adults as well,” said Rockwell. “We like to give them a little bit of exposure to who we are, so they have a little better understanding of us and to let them known that we are just like them in a lot of ways, which we are. We are all connected, we are all related. We are all human beings.”

Den leader Don Davidson, whose Webelos Pack 104 hosted the gathering, said he hoped that is exactly what the children took away from the day. “This is what Boy Scouts is all about,” he said, “exposing them to different things, different cultures. “This is a real treat for them. Its an awesome thing for them to see.”

The day was a treat too for Susan Tackett, known by the Cherokee name Momma Bear. She spent the afternoon leading the children in dances, saying afterward she gets immense joy from sharing the music with children. “We want them to learn that our way is not dead yet. It is still alive,” she said.

The Candy Dance, where children dance to the drum then race to pick up candy at their feet during breaks in the beat, was an afternoon highlight for many of the children and their siblings including Tiger Cub Julian Sharp, 6, who described it as “great.” “I’ve never seen them before,” he added of his den’s Cherokee guests before scrambling to grab a rattle to join one last song.

Spirit Bird said the Cherokee don’t believe it will be the last time.

“Our people have no word for goodbye. It is always, ‘until we meet again,’” she said.