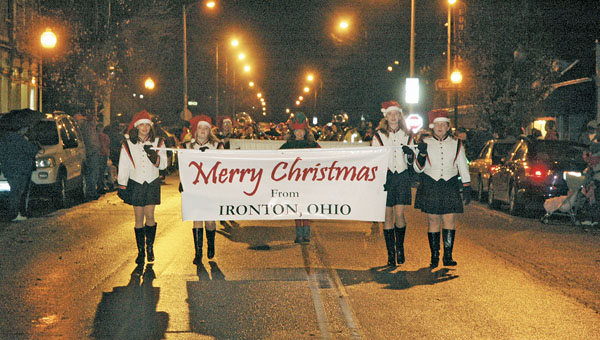 Cheryl McNeal, of Pedro stood with her nephew, Dawson Lewis, Monday night near the Center Street fountain. They came to see the Ironton Christmas Parade. Lewis’ husband, John was in the Head Start delegation. Asked who he wanted to see, little Dawson first thought of family.

“Uncle John!” he replied excitedly. When prompted by his aunt, Dawson was reminded of another great guy who would also be in the parade.

Not far away, Josh Farrow, of Ironton, waited to see his girlfriend, Michelle Easterling and her daughter, Tori Hill, who would be in the Yvonne DeKay delegation. Farrow said this was his first time seeing the Ironton parade.

It’s been said the parade is a family event and that was evident on the sidelines. Marsha Kerns, of Pedro, waited near McCauley Furniture on Second Street to see her granddaughter, Kylee Howard, a Rock Hill third-grader and a cheerleader.

“I come every year,” Kerns said. “And in the same spot like everyone else.” 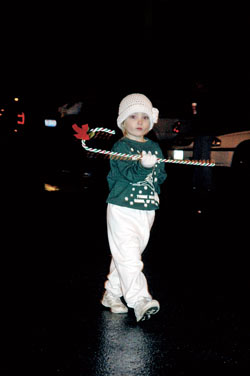 Katelyn Music, a student at Yvonne DeKay School of Dance, struts her stuff in the Ironton Christmas Parade Monday night.

The parade, sponsored by the Ironton Lions Club, made its way through the streets in spite of the rain. The El Hasa Shrine contingent, complete with a lighted hillbilly truck, won the Snowflake Award; Zumba Fitness won the Jingle Bell Award and the Ironton High School Band won the Santa Claus Award.

While the bands, the floats and the dancers may have wowed the crowd, the star of the show road in a shiny red convertible at the end of the procession: Santa Claus waved to the children, old and young. Attention now turns to Coal Grove Christmas Parade at 6 p.m. Friday.

Approximately $330,000 in state funds are slated to come into the county for transportation projects. The Ohio Department of Transportation... read more