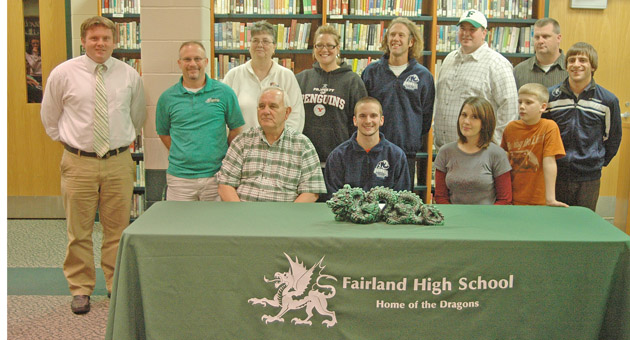 When Tanner Mattie showed up for his first cross country practice in the seventh grade at Fairland Middle School, he was wearing jeans and untied skater shoes. He ran with the fourth best runner and coach Chuck Wentz asked him, “How did it go?” And Mattie answered, “I’m fine.”

The next day he wore long shorts instead of jeans and ran with the number three man. On the third day, Wentz said Mattie just took off running and won the race.

“He has pure, natural ability. But he works hard and that’s why he’s so good,” said Wentz.

Mattie kept getting better and soon became one of the best runners in the state of Ohio. He finished 13th in the state cross country meet as a junior and 11th this year despite being hampered by an injury.

How Mattie looks on the cross country course or track is all that mattered to Shawnee State Golden Bears’ coach Eric Putnam who signed Mattie to a scholarship on Thursday.

“I always grew up looking up to people,” said Mattie. “I grew up with people like Chuckie and Joe. I tried to be like them. After I leave Fairland, I want people to be able to talk about what I accomplished.”

Mattie — who owns the school’s 5K record — said Shawnee had a lot to offer.

“I have a lot of friends there and I like the coaches. They have an awesome pre-med program,” said Mattie who plans to become a nurse.

Shawnee State became a member of the Mid-South Conference a few years ago and added track to its cross country program. Mattie runs both in high school as well, but he prefers cross country.

“It’s kind of a toss-up between cross country and track, but I always loved cross country. I like going out and running a course instead of running in a circle on a track,” said Mattie.

Although he prefers cross country, the highly self-motivated Mattie said how well he runs often depends on his previous season.

“If I had a bad cross country season, I go out and try to have a good track season,” said Mattie.

Coach Wentz said Mattie is strong in either sport, but he leaned toward cross country as his better sport.

“He belongs in a 5-mile race. The longer the race, the better he does,” said Wentz.

DETROIT (AP) — All Ohio needed was one big play on offense — anything that could help the Bobcats hold... read more