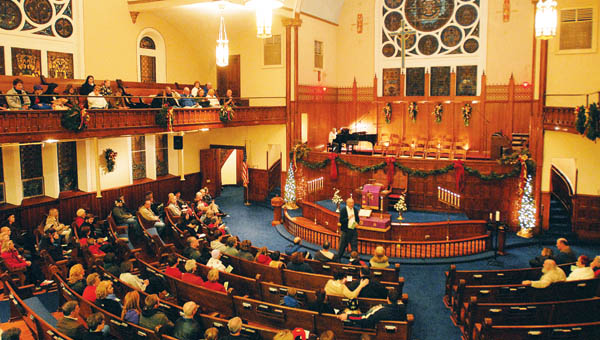 In the mid-1800s when business and government leaders began laying out the city of Ironton, they allotted corner lots to churches. The Baptists took up residence on a corner lot, as did the Presbyterians, the Catholics and other denominations. Those city leaders had in mind accommodation of faith; they could not have known then that someday their careful planning would be an important factor in what has become an annual holiday tradition that is unique to the city they created.

The Lawrence County Historical Society Christmas Candlelight Tour of Churches was Saturday. The faithful walked to eight houses of worship and the historical society museum, all within blocks of each other, getting the chance to see some of the city’s oldest and grandest buildings. There they sang Christmas carols and heard reflections on the meaning of the season. The church walk, as it is commonly known, drew a couple hundred people.

Some church leaders reflected on the prophecy fulfilled when Jesus Christ was born.

The Rev. Dennis Strawn, pastor of First Baptist Church, reflected on the meaning of Isaiah Chapter 9: “For unto us a child is born, unto us a son is given.”

The Rev. James Stowe, pastor of Quinn Chapel African Methodist Episcopal Church, took his theme from Isaiah Chapter 11 and the Old Testament foretelling of the birth of Christ through the line of David: “A shoot will come up from the stump of Jesse, from his roots a branch will bear fruit.”

The Rev. David Ritchie, pastor of St. Paul Lutheran Church, reflected on how the birth of Jesus Christ “was like no other. God became man. Divinity arrived.” He read from an inspirational writing of Biblical scholar Max Lucado.

At Gateway Baptist Church, the Rev. Scott Jenkins, pastor, read Luke Chapter 2 — the Christmas story— and reflected on how the little town of Bethlehem, a relatively unknown enclave at the time of the birth of Christ, is now known the world over for that one birth long ago.

“It was a humble place for our Savior to be born,” Jenkins said. He reflected that while Bethlehem became defined by the birth of Christ, “We are defined when Christ is born in us.”

The Rev. Wayne Young, pastor of First United Methodist, told the people who found a seat in his balcony they were sitting on pews saved from the original church, Spencer Chapel, built in 1853. The “new” church that now stands at South Fifth and Center streets was not built until 1892.

A couple of blocks away at First Presbyterian Church, Elder Clarence Fowler spoke of how that church was directly tied to the founding of the city. Founder John Campbell and his family were among the first families to fill pews in that church. One window is dedicated to a Campbell who was missionary to Africa.

The Rev. David Huffman, pastor of St. Lawrence O’Toole Catholic Church, told the congregants the Ironton community actually began a few miles away at St. Mary’s Church of Pine Grove, when Irish and German immigrants settled in Lawrence County to work in the pig iron industry.

“This is the third church on this site. The first held 1,000 people,” Huffman said. The existing church, while one of the oldest in the city, was renovated in the 1970s. He pointed out the 12 Apostles are painted in small murals on the ceiling of the nave.

At Christ Episcopal Church, Richard Walton noted that while attendance at the

21st Century church walk is optional, at one time, church attendance was compulsory in some places.

“There was a law that you would go to church,” Walton said. “If you didn’t come they would come and drag you (to church).” He sent visitors on their way to the next church with the traditional “Merry Christmas” and not “Happy Holidays” that is common in some places today.

“Even though it’s not politically correct I really don’t care,” Walton said.

Students from Rock Hill High School National Honor Society and faculty are presented with a check for $2,000 by Laura... read more