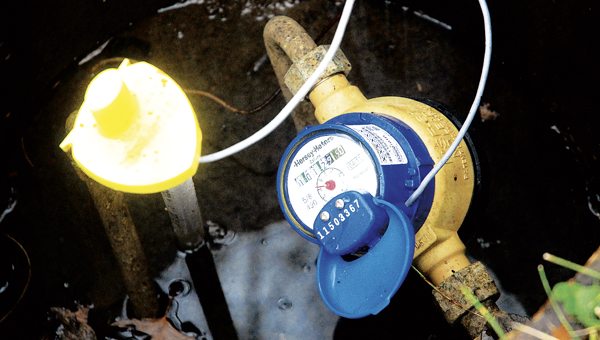 Shown is a new water meter at an Ironton home. It is part of a new system to calculate water consumption.

When Donna Thompson got her water bill earlier this month, she got an unexpected surprise and not a pleasant one, either.

The bill, which is normally anywhere from $60 to $70, was $270. Stunned, she spoke with family and neighbors who reported the same problem.

“My mother and father, senior citizens, got a bill for $300 and theirs is usually $60,” Thompson said. She called the city building and was told the city officials had gotten numerous complaints about the size of the water bills. Mayor Rich Blankenship said the issues that caused the huge increases are being addressed.

Blankenship said the city is transitioning from the old water meter system to the new one and there are some glitches in the system that cause it to incorrectly calculate some bills. He said also, the bills have six weeks of water consumption on them, as opposed to the standard four weeks and that accounts for some of the additional cost.

“We understand the bills are way out of whack and we are working diligently to correct these things,” Blankenship said.

Blankenship asked for patience from customers who have gotten a larger-than-usual water bill and said adjustments will be made when necessary.

“We have two people in our water office and they have been cursed, yelled at,” he said.

One thing that the new system better detects is water leaks. Blankenship said in a few cases, city workers have gone to houses where the bills are excessive and found water leaks, which accounts for some of the larger-than-usual bills.

“These new meters are putting out more pressure because they’re new and not clogged up. A lot of times people just didn’t know they had a leak,” Blankenship said.

While some people with such frustrations often attend city council meetings, Blankenship said he will not discuss people’s water bills and personal information in a public forum.

The city began installing 4,800 new water meters in August and should have the project completed by the first of the year. When completed and the glitches worked out, the $1.4 million water meter system will allow for an accurate reading of water usage and free up city workers from having to go door-to-door reading individuals meters, the mayor has said previously.

The new meters can be read when a water distribution worker drives by it.

The city received a 30 percent forgivable loan from the Ohio Environmental Protection Agency to pay for a portion of the project.

SOUTH POINT — South Point water and sewer rates are going up to offset increases in other village expenses.... read more