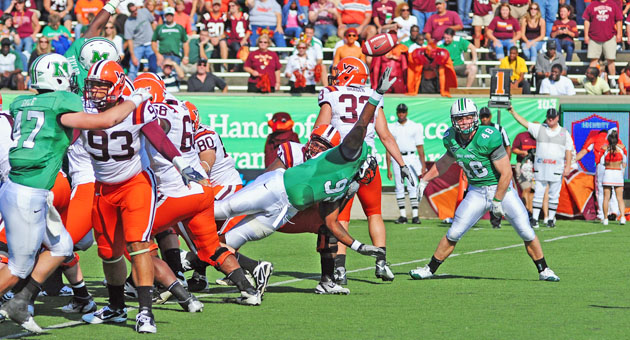 IRVING, TX — Marshall senior defensive end Vinny Curry was named 2011 Conference USA Defensive Player of the Year in an announcement made Wednesday afternoon by the league office for his outstanding play this season.

The votes from each school’s head coach or administrative designee were tabulated to determine the winners of the league’s individual awards.

Curry (Neptune, N.J.), who was also a captain this season, was also honored Wednesday by CBSSports.com with second-team All-America honors as he was the only non-AQ defensive lineman named to either the first or second team.

He is also the NCAA’s active leader in career tackles for loss with 48.0, is second in career sacks among active student-athletes with 26.5 and ranks seventh in career forced fumbles with nine.

The Herd, who went 6-6 overall against the nation’s 15th-toughest schedule, also won a program-record five Conference USA games in 2011.

Marshall will travel to St. Petersburg, Florida for the 2011 Beef ‘O’ Brady’s Bowl St. Petersburg on Tuesday, December 20 where it will face FIU (8-4 overall).

DALLAS (AP) — It is the new image of baseball’s moneyed elite: For the second time in three days, the... read more