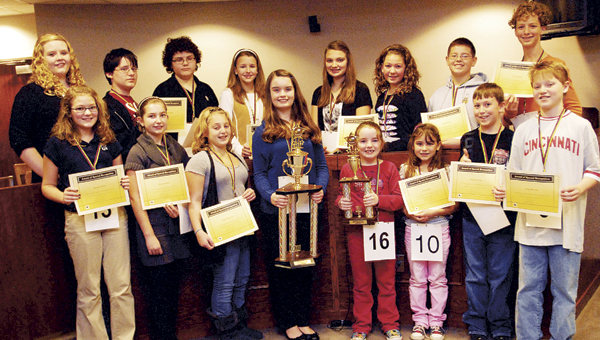 Jenkins and Neal, who were the last two spellers in the final five rounds of competition, were both crowd favorites earning long rounds of applause.

Neal, who is profoundly deaf and has cochlear implants, won audience members hearts with her visible determination and outpouring of emotion after learning she spelled guillotine wrong in the final round and was eliminated following Jenkins’ correct spelling of two final words — quell and genre.

Jenkins, an eight grader, also recently won her fifth straight title at the school level and has been an ongoing source of pride for her school district and the entire region.

“She is just an exceptional student and we are very proud of her,” said Nelrose Coffman, Symmes Valley director of instruction and curriculum.

Jenkins along with the other top school winners will take a written test to qualify for the Ohio University Scripps College of Communications preliminary State of Ohio spelling Championship in 2012.

“I’m glad that I won for the fifth year, but I am sad that this is my last year,” said Jenkins, following the competition Tuesday.

Jenkins said hopes to make it to all the way to the semi-finals of the National Spelling Bee in Washington D.C. scheduled for May 2012. In 2010, Jenkins competed on the national level but fell just two points shy of qualifying to the semi-finals, placing 49th.

Jenkins studies spelling an average of 2 hours each day, according to her father Scott Jenkins. The busy teenager is also enrolled in a number of accelerated courses, is the president of her school’s student council and is a leading Quiz Bowl scorer.

“I make time for it because I am gifted from God and I can, so I need to take advantage of this and work toward it. This is my last year so I might as well put in what I can because it will all be over in June,” Felicity Jenkins said.

Shelley Neal, mother of 9-year-old Emily Neal said her daughter is very competitive and has put a lot of time in to preparing for her first spelling competition. She “absolutely” plans to be a top speller next year, Shelley

Neal said, adding “She came in with the attitude that she was going to beat them all this year.”

Convicted murderer Kara Garvin has lost her first bid to have her conviction overturned and get a new trial.... read more