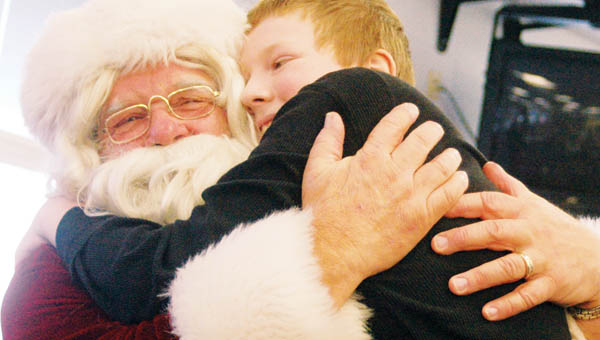 ELIZABETH TOWNSHIP — To elementary school students, the most awesome person this time of year is (sorry) not the teacher, not the principal, not even the most popular kid on the playground.

The person occupying that hallowed position is Santa Claus and when he paid a visit to Rock Hill Elementary Thursday, compliments of the Ironton Elks, he turned more than a few heads.

He and his Elks friends brought an early Christmas to 35 children in the special education classes.

“We’ve been doing this as long as I can remember,” Elks member Jack Adams said. “I love kids and this is a reality check. This makes you think of your own family and how lucky you are.”

Elks members got a student’s name, age and wish list and then went shopping. Thursday, they passed out the presents and then had a pizza party; the food was donated by the Coal Grove Giovanni’s.

Jenny Smith got a doll set; Khalil Bragg got a fleece throw, a soccer ball and a truck. Alex Daniels hugged his Tyrannasaurus Rex over and over again. Sabella Davis posed with her art set and Justin Bieber CD.

Families were invited, which meant Karen and Bob Reed could watch as their son, Aaron, unwrapped a train set.

“This is the first year he’s ever asked for anything,” Karen Reed said.

While Santa got the hugs and the glory, Elks members watched the present passing with their own satisfaction in knowing these students enjoyed the day so much. Elks Exalted Ruler Mary Easterling summed it up in one sentence: “This is more for us than for the children,” she mused. “Definitely.”