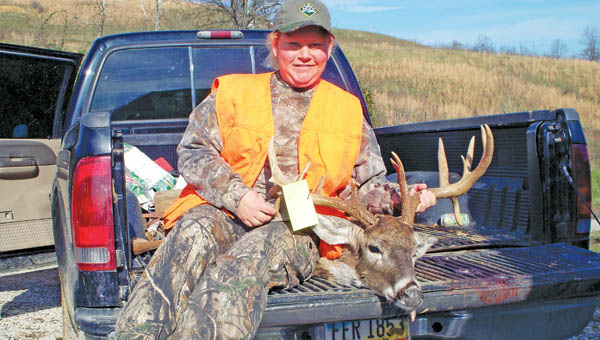 WATERLOO — Amber Cade was determined to shoot a deer this hunting season.

The 32-year-old postal worker, wife and mother of three had been waiting for her chance to bag a big one for more than week with no luck.

After taking the day off work on Monday of the season, Cade had just settled down under the hunting lodge that her and her husband, Tom, are building on their farm in Waterloo, when a large buck appeared out of nowhere.

“It was like someone had jumped out of the dark and scared me to death. My body started shaking and everything. I shot at it and at that point he limped and I got one more shot on him and then he walked away.”

Amber Cade quickly ran back to the house to get her husband to help her track it, showing him with her hands how wide she thought its rack was.

“I had my hands spread out wide and he said, ‘Are you sure’?” “I said. It could have been a spike, but I’m pretty sure he was this big.”

After tracking the buck across their land and onto their neighbors’ farm, they finally found him.

The buck’s his rack was even bigger than Cade thought. It was 19 points.

The rack is atypical and had appeared flat on one side to Cade when she took the shot with her daughter’s 20 gauge because tines had grown out toward the back of the deer’s head.

It is the buck of a lifetime, said Amber Cade, noting it is also the first one she had ever shot on her own.

“I don’t think I’ll ever get another deer that big,” she said.

Cade has been hunting for several years but normally helps her children KayLee, 9, or Uriah, 11. Her 6-year-old daughter Enola is too young to hunt, according to Cade, who said the couple will begin taking her when she is 8.

“I was hooked before I shot him. That rush,” she explained. “My feeling, even when I see does, my body shakes and it’s like this huge rush.”

Cade plans to have the head mounted and hung in the family’s hunting lodge when it is completed next year.

In two months, she said, she will have the rack officially scored. As for the meat, it will be processed into summer sausage. Her husband owns Blue Barn Deer Processing.

Hope during the Holidays memorial service at Slack and Wallace

SOUTH POINT — Slack and Wallace Funeral Home in South Point will have its first “Hope during the Holidays” memorial... read more