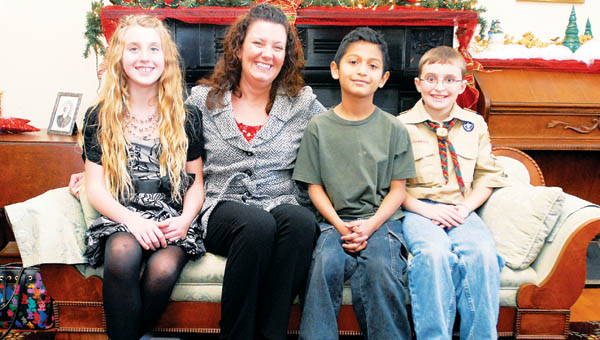 Dawson-Bryant Elementary school teacher Lori Deer is seen with her students Mikayla Daniels, Jasson Aguilera and Nathan Davis at the Lawrence County Historical Society Museum. All three of Deer’s students placed in the historical society’s essay contest that highlights people or events prominent in the history and settlement of Lawrence County. Jasson Aguilera, who wrote about Dr. Lowery, placed first, Mikayla Daniels, who wrote about Osa Wilson, placed second and Nathan Davis placed third with his essay centering on the life of John Campbell.

From its notorious side to examples of the entrepreneurial skill that made Ironton an international player, fourth grade students in the county schools dove into the history that is in their back yards.

Sponsored by the Lawrence County Historical Society, the history essay contest, designed to foster a love of the past in young students, is in its second year.

Taking third place was Nathan Davis who won with his essay on John Campbell. Nathan discovered Ironton’s founding father at this year History Walk at Woodland Cemetery this fall.

“There were so many choices at the ghost walk,” Nathan said. “ I wanted to write about anything interesting and he seemed the most interesting because of all the furnaces he had. I like history because it is something for us to learn about.”

Second place was won by Mikayla Daniels, who wrote about the tragic death of wife and mother, Osa Wilson. Wilson’s death has always been cloaked with legend and the statue of a young mother at her grave has inspired ghost stories.

Equally notorious in death is Dr. Joseph Lowry, whose possible murder, prompted grizzly discoveries after the exhumation of his body. That death and later investigation was the topic of Jasson Aquilera, who took the top honors in the contest.

In less than a week another Secret Santa holiday campaign will be over. “We are wrapping everything up literally and... read more