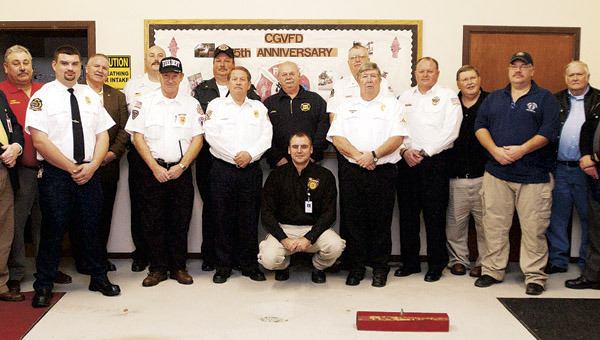 COAL GROVE — In 2010, Lawrence County led the state per capita in fire fatalities with eight deaths.

One house fire in Elizabeth Township in October claimed five victims alone, including an 8-month-old baby. It was the worst fatal fire in the state that year.

Less than a month later, another woman was killed in a house fire in Fayette Township.

Since then, with the help of the State Fire Marshal’s office, Lawrence County’s fire departments have stepped up fire prevention and safety in a big way and were recognized for their efforts Thursday.

State Fire Marshal Larry Flowers presented each the county’s 15 fire departments with a certificate to mark 13 months with no fire fatalities. The presentations were made Thursday night at the Coal Grove Fire Department. The Lawrence County Emergency Management Agency and sheriff’s office, as well as the county’s Fire Chief’s and Firefighters associations were also recognized.

“You have just surpassed 13 months since your last fatal fire,” Flowers said. “And all of you know the stats prior to that, and it was problematic.”

During that time period, the fire departments implemented more than 50 different programs, including fire safety weeks, talking to school children, poster contests, and giveaways to spread the fire prevention message. Through these programs, more than 250 free smoke detectors were given away through the SAFE (Smoke Alarms For Everyone) program.

“There is just no question in our minds that that’s made a difference in Lawrence County,” Flowers said.

Assistant chief of the Division of State Fire Marshal’s Fire Prevention Bureau, Rich Palmer, said he knew there was some concern because of last year’s fatality numbers.

“We were concerned. And we see fire deaths all over the state, obviously,” Palmer said. “We knew there was a trend. We knew there was a challenge. And I think one of the key points I learned was that from 2005 to 2010 you had fire fatalities every year in Lawrence County. And you had zero this year, so the efforts work.”

Coal Grove Volunteer Fire Department Chief Gary Sherman said the recognition was well deserved by the departments in the county.

“We’ve worked our butt off on fire prevention for the last year,” he said. “And we’ve had good results.”

Sherman said his department gave out more than 40 smoke detectors to people in need. The department also had a fire safety day for the village and a poster contest at Dawson-Bryant Elementary School where the winners got bicycles.

Ed Webb, chief of the Chesapeake Volunteer Fire Department, said his squad had an open house where villagers could pick up a free detector with proof of residency. He also said members of the department went to people’s homes to install them if needed.

“We had a tremendous turnout,” Webb said. “We gave out over 40 in just one day. It’s something free to save your life. What more could you want.”

Webb said he was proud of the county’s accomplishment in lowering fire fatalities but said some people still don’t understand the importance of the smoke detectors.

“Once they get the news or see something on TV about a fire, it jogs their memory,” Webb said. “’Oh, we don’t have one.’ It’s a scenario of, it’s too late for somebody else, and jogs memories for someone else to go out and get one.”

Flowers reminded the firefighters that one year of fire prevention isn’t enough.

“You’re not wrapping up this program,” he said. “This is a milestone to celebrate this first year. You’ve got to keep this thing going. You’ve got to talk about.

This effort has to continue. This is not the end of the story.”

Some things in life — and for life — cannot wait

We will all have to wait at some point this holiday season. We might wait in line to purchase the... read more