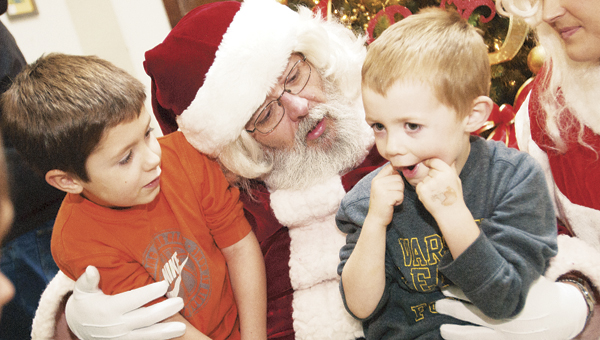 Six-year-old Bryce Jacobi, left, and Aidyn McGhghy, 4, right, tell Santa Claus what they would like for Christmas during the Cookies with Santa event at the Ironton City Center Friday evening.

Danielle Bowling, of Ironton, pitched her Christmas list to Santa Friday night. It kind of had a theme.

Her mom, Courtney, waited a few feet away while the five-year-old had her discussion with Santa and Mrs. Claus.

Tori Hill, 6, also of Ironton, forgot her list at first but whispered it to the missus before she left.

The third annual Cookies with Santa, hosted by Ironton municipal offices, was Friday night at the Ironton City Center.

“Look at this place,” finance director Kristen Martin said, noting the line to the Claus couple at one point reached out the double doors. “This is the biggest one ever. This is great.”

Mayor Rich Blankenship said he was also pleased with the turnout and said he hopes in the future, downtown businesses will get in on the act and stay open late the day of the Santa visit, catching potential customers who show up to the city center.

Health commissioner Laura Brown was as pleased with the turnout as Martin and Blankenship were. She said the message behind the Santa event was that Ironton has a lot going for it.

“I think this says this is a good hometown and a good place to raise your kids.”

Focus on staying home for the holidays

There is something about the holiday season that takes our heart and mind to thoughts of home and memories of... read more