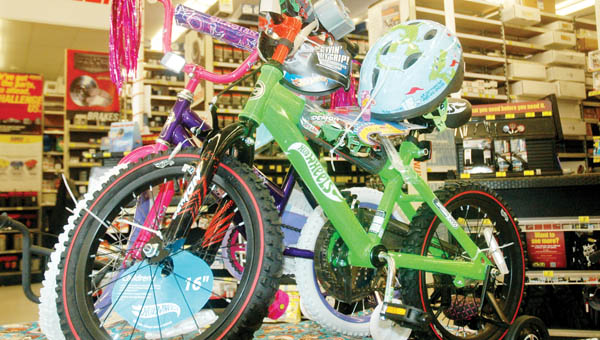 Advance Auto Part and Dickess Auto Repair employees have teamed up to have a bicycle giveaway this Christmas. Thanks to additional community support, they were able to buy more bikes for the giveaway.

The weather may not have given way to snow yet this holiday season, but an outpouring of community support has made a simple Christmas giveaway snowball into something much bigger than organizers expected it could be.

Since word has spread about the joint effort of employees at Advance Auto Parts and Dickess Auto Repair to buy bicycles for children this Christmas, organizers said more than $400 have been donated to purchase additional bikes.

Don Schwartz, manager of Advance, said he was both surprised and pleased by the growing support.

“From the original plan of chipping in and getting two bikes, this has grown nice,” he said.

Schwartz and his crew decided to get bicycles for children this year instead of having their own gift-giving Christmas party. The effort started with two bikes, one for a girl and one for a boy. Soon after, John Dickess and his employees at his neighboring auto repair shop joined in with two more bikes.

By Tuesday afternoon, four more bicycles had joined the display at Advance thanks to community donations.

Sunday afternoon, Schwartz said, a WWII veteran who wanted to remain anonymous donated $200 for the cause. Someone else donated $40. Another couple offered to buy the bicycles themselves and bring them in. Schwartz also said more bicycles are going to be purchased.

Jennifer Dickess, who teaches senior English at the center and is John’s wife, said her classes were excited to donate more than $160 for the bike giveaway.

“This year we had a big Christmas tree on the wall and sold ornaments made out of paper,” Dickess said. “For every ornament you bought for $1, your name got put on the ornament and on the tree. We told (buyers) we would use the money to get presents for children in the area who don’t have the kind of Christmas most kids have.”

English teachers Connie Cantrell, Sylvia Ross and Shannon Perdue were a part of the same tree project and bought presents for eight children whose names were on the South Point Walmart’s Angel Tree.

When Dickess heard about her husbands joint effort with Advance, she asked her students if they wanted to be a part of that, and they did.

“Teenagers are not always known for their giving and selflessness and I was tickled that they were moved to help somebody else,” Dickess said. “It was really refreshing to see that out of 17 and 18 years old kids, that they get it.”

Both Schwartz and John Dickess said they would still accept donations up until they draw names Thursday evening. They will present the bicycles at 3 p.m. on Friday with CCC students and Santa Claus on hand to help.

“I’m actually kind of shocked,” John said about the community’s support. “I know people give, but it was kind of late in the season.”

“The whole thing has surprised me,” Schwartz said. “The community involvement, it’s great.”

To donate or enter the drawing, visit either store located on Park Avenue.