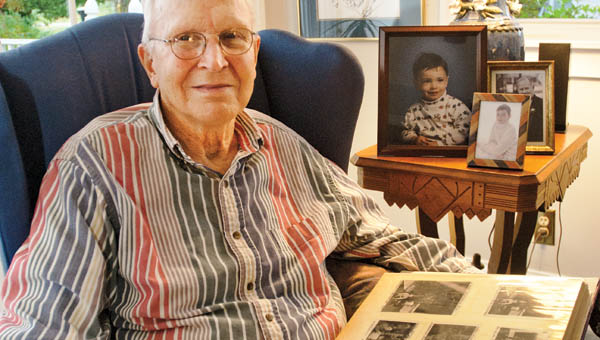 “I love Christmas,” Roger Noonan said. The Ashland, Ky., resident has celebrated a lot of Christmases in his nearly 85 years. But perhaps none quite so sweet as those of his childhood.

Noonan grew up in a house on Montgomery Avenue in Ashland during the Great Depression. Times were tough. But his memories of Christmas are rich and vivid. His family may not have had much money, but they were rich in all the things that really mattered. They had a wealth of family, of tradition, and of imagination that allowed them to make happy memories in spite of the times and the circumstances.

“Finances were limited,” Noonan said. “I remember my dad would go out, one of us would go with him, and we would cut down a tree for Christmas.”

Noonan and his two brothers, Charles and James, would each write letters to Santa they would “send” by burning the letters in the fireplace and watching the smoke waft up and out of the chimney, presumably on its way to the North Pole.

“They had these little boxes they would give us, little boxes of goodies,” Noonan recalled. “We thought they were wonderful.”

After church the family, his dad, Arthur, his mom, Tina, plus grandparents and aunts and the children, would assemble around the Christmas tree. The family would sing “Jingle Bells” and the youngsters would recite poems to Santa.

And there was dinner.

“We couldn’t even afford a turkey. So we’d get the toughest old chickens that ever were and we would have that on Christmas Eve,” he said.

“We always had green beans and beets. We didn’t have fancy stuff but it sure tasted good to us,” Noonan said.

Gathered together, they were a family making memories of Christmas that would last this man’s lifetime.

“The family things, “ he said, “are the things I remember most.”

Ashland, Ky., home stands out even among neighbors ASHLAND, Ky. — Its stuccoed exterior and flowing shingles on the cross-gabled... read more