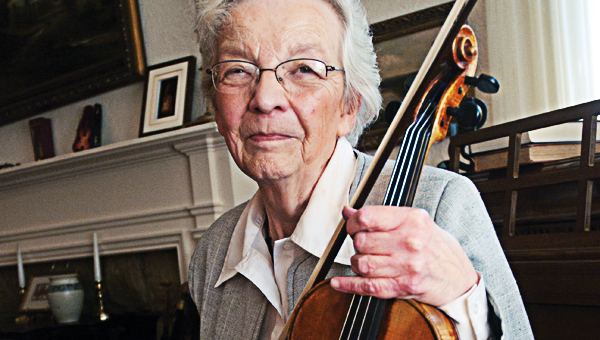 HUNTINGTON, W.Va. — You’d be hard pressed to find anyone that loves being a second fiddle more than Janet Ensign Bromley.

“Second violin is frequently more difficult to play than first,” Janet said, a 40-plus-year veteran second violinist in the Huntington Symphony Orchestra. “We seldom get the big melody to play. We are always the harmony or contrasting melody.”

“Occasionally, we go into shock. We’ve got the melody and we’re leading it in!” Janet explained.

Listen to the opening to Beethoven’s Fifth Symphony and you can hear what she means.

Falling in love with music and playing an instrument happened early on for her, Janet said.

When she was a child in Huntington, Janet would rub two sticks together and pretend she was making music on a violin. Her parents, Mr. and Mrs. Darwin Ensign, must have gotten the hint, she said, because for her 7th birthday she got a real violin, half-sized to fit a child. Ever since, her life has been committed to music and the arts.

“We have this gene,” Janet explained about her artistic family roots. “My mother was classically trained as a musician but she was a singer. She had a beautiful mezzo soprano voice. Her mother too was professionally trained.”

Janet is also a lover of art, her home adorned with paintings. Many of them are by family members, including one painted by her son of the beloved family Siamese cat, the late Sylvester.

It was because of the support of her mother that Janet was able to practice, take lessons and excel at the violin.

By the time Janet was a sophomore in high school in 1939, she had become advanced enough that she was invited to play in the orchestra at Marshall University, then Marshall College.

“I was invited to come play, guess what? Second violin,” Janet said.

“I still remember. The first piece I ever sight-read was a Hyden Symphony,” she said, humming a few bars. “It was his last symphony. I can even remember the number on it. It was K-104.”

Janet was also invited to play in the first Huntington Symphony Orchestra, which began in the 1930s. Her mother took her to rehearsal twice a week, from 7:30 to 10 p.m. When she returned home around 11 p.m., she did homework.

“Mother would make some popcorn and we would go through the Latin lesson for the next day,” she recalled.

Janet graduated from Albert Gallatin Jenkins Laboratory School of Marshall College and went on to graduate from Oberlin College Conservatory of Music, majoring in music education and minoring in violin performance.

From there she went on to teach violin and conduct the orchestra and band at Berea College in Kentucky for two years before returning to Huntington.

These days, Janet, now 86, is still playing second violin in the newest version of the HSO, which re-started in 1970. She also plays solo at her church, First Congressional United Church of Christ, every Sunday.

“There are so many styles and so many ways you can make music,” Janet said. “I enjoy it because I also play by myself in church and I have that style. And I have a few solo pieces that I like to play by myself. I enjoy it more playing with people and the challenges of it. I think my involvement with music has helped keep the rust off the brain.”

As much as her passion is for playing her violin, Janet also enjoys spreading music to grade-school children. In 1974, she spearheaded the EFFORT program, Education for Future Orchestra Related Tradition.

The program takes orchestra members to every grade school in Cabell and Wayne counties, demonstrating instruments for the children and letting them play them as well.

“I have brought music to people to try and persuade them to enjoy music,” Janet said. “By bringing performances of professional people… I get music to them they are not used to hearing. So, they know they’ve had a fine performance by professionals in their presence, regardless of their size.”

Even with all her community involvement, Janet said her passion is still playing in the orchestra.

That Hyden symphony Janet first sight-read as a teenager for the Marshall College orchestra is something she will always remember. Now, contemporary orchestras play the same piece faster.

“They play it faster now than we did back then,” Janet said, adding that some things in music should never change. “Now, you don’t speed up the ‘Stars and Stripes Forever.’ That’s for marching and that is at 120 beats per minute, marching tempo. And you don’t play with that.”

House boat offers couple comfort of home on the waters of the Ohio What would make a couple trade their... read more