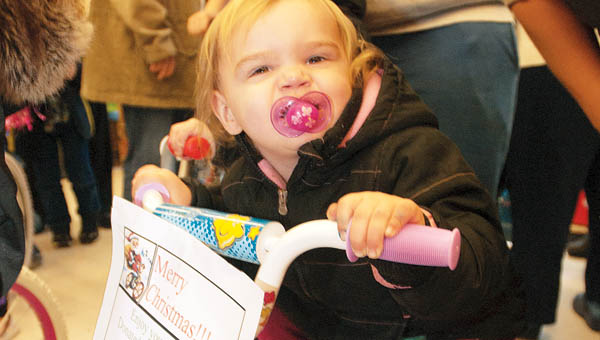 Two-year-old Emily Butler goes from ornery to happy to giggly as she watches children receive their brand new bicycles Friday afternoon during a bike giveaway sponsored by the employees of Advance Auto Parts and Dickess Auto Repair, located on Park Avenue.

A mother of two girls, Kimberly Lander, of Franklin Furnace, didn’t know what kind of Christmas her 8 and 10 year old would have this year.

Lander lost her job two months ago and money had been tight.

On a trip to Advance Auto Parts to pick up antifreeze, Lander saw a display for a bicycle giveaway and entered her daughters’ names on a whim.

Thanks to community support and eager employees at Advance and Dickess Auto Repair, both girls were able to get bikes.

Employees from both Ironton businesses joined forces to raised money for a Christmas bicycle drawing for children in the community. The effort started with two bikes and within about a week had grown to 31 bikes,which were handed out Friday evening at Advance.

“I didn’t know I was going to get one,” said Belle as she sat on her brand new, bright pink bike, complete with sparkly streamers on the handlebars.

Lander said someone called her Friday morning and told her both her daughters would be able to take home a bicycle.

“I think this is a great thing,” Lander said. “(Jasmine) was going to share hers equally. It’s a blessing. It really is.”

“I can’t believe how much people have given,” Dickess said, saying that they would try for 100 bikes next year.

Even the day of the giveaway, someone donated $200 more dollars to the cause, which meant another trip to Walmart to purchase additional bikes.

“I didn’t think we’d win,” said Amanda Laber. “I usually have no luck.”

Laber’s 2-year-old, Emily Butler, was timid at first when receiving her tiny bicycle from Santa on Friday. She quickly got used to the idea and rode it away through the store.

Elenor Bacon brought her 10-year-old grandson, Kionté, to the giveaway as a surprise.

Both Dickess and Don Schwartz, manager of Advance, said they were shocked at the number of bikes they were able to give away.

“We live in a good community,” Schwartz said.

“It makes you wish you had 30 more (bikes) to give away,” Dickess said.

Carryover from 2011 to 2012 will be small, Ironton officials say

Ironton’s 2012 budget is likely to be leaner and meaner than in previous years and is likely to get little... read more