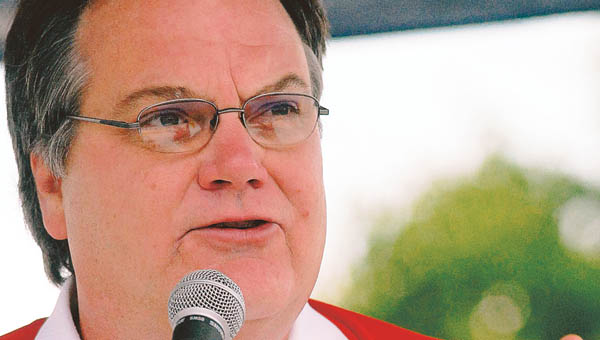 They were words J.B. Miller never expected to hear: He was out of a job.

But that’s what happened when the veteran radio personality was told he no longer had his morning drive-time show on a Huntington, W.Va., station.

“It was absolutely crazy,” Miller said. “When I lost my job, I thought it would be two weeks and I would be back to work. I had no idea it would take me eight months. I had never been put in a situation like that. I had been working my entire life.”

For almost four decades, the Ironton native’s mellifluent baritone was heard morning after morning on the radio. That was the work he knew and loved.

But on the Tuesday after Christmas Miller not only got a new job, he discovered a new career, one he’s going at with the same gusto he gave to the microphone and control board.

Miller is now the manager of the Habitat for Humanity Re-Store, 240 Third Ave., Huntington, that sells a wide range of home improvement items.

“We are the only Re-Store between Charleston, W.Va., and Chillicothe,” Miller said. “We get items from the big box retails like Lowe’s, Home Depot, 84 Lumber. A few weeks ago, Lowe’s gave us cabinets. It was a line of cabinets that was changed and rather than scrap them, retailers gave them to us. We price them and put them on the floor.”

Inventory also comes from individual donations that the store personnel picks up three times a week.

Money made from the store is channeled into the houses built by Habitat for Humanity, the international program that enables those who wouldn’t otherwise have the chance become homeowners.

“We have hardwood flooring, gently used furniture, sectional sofas, microwaves, light fixtures,” Miller said. “I call it a hodgepodge of everything and everything is priced 50 to 90 percent off retail. We have real deals. We have people who come every day. It is never ending. Tomorrow (the selection) will completely change.”

Throughout the job hunting experience, Miller said he worked to keep his sense of humor and perspective about the process, but it was hard.

“I had a friend who said ‘Every time I talked to you, you sounded a little more down,’” he said. “The most frightening thing was that every time I went on an interview, I thought that this was the one. Then it would be two, three, four weeks and nothing and I’d start all over.”

However, Miller talks about the past few months as a learning experience, right down to his first day on the new job learning how to running his first cash register.

But Miller expects to parlay his celebrity into helping his new employer as he goes out to the large retailers to increase donations to the store. And those used to hearing Miller won’t be disappointed since he intends to keep his DJ wedding business and provide color commentary for the annual Ironton-Lawrence County Memorial Day Parade.

“I miss radio,” he said. “You don’t do something for 36 years and don’t say you won’t miss it. But I have the best of both worlds. I have basically two careers. … I am grateful to be working again, grateful for the opportunity and hope to surprise these folks that I can do the job.”

SOUTH POINT — “New Year, New You” is the theme for January, according to officials with the Lawrence County Health... read more