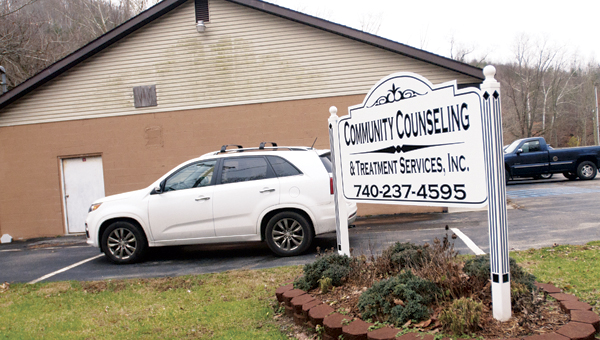 The new Community Counseling and Treatment Services, Inc. is located on State Route 93.

For some people, the last time they walked through the doors of the single level, brown brick building on State Route 93, it was a place where they could buy prescription pain pills to fuel a never-ending addiction.

Now when people walk through those doors, they will find a haven for those seeking help for drug and alcohol addiction.

Community Counseling and Treatment Services, Inc., which opened at the end of December, is an Ohio Department of Alcohol and Drug Addiction Services certified and non-profit drug treatment center specializing in the treatment of opiate addiction. It is housed in the former Iron Rock Medical Center, which was shut down in 2003 for operating as a pill mill.

Co-owners and counselors of Community CTS, Paul Vernier and Michael Fraulini said they opened the counseling and treatment center to fill a need in Lawrence County, where clients won’t feel judged or herded through treatment and to change public opinion about pain pill and drug and alcohol addiction.

“Sixty percent of opiate addicts are upper-middle class,” Fraulini said. “The days of thinking of somebody in a trench coat in a gutter don’t fly anymore. I consider that one of our goals, to change that public opinion.”

“We both have a really strong passion for this and we thought long and hard about Scioto County and Lawrence County and where exactly we wanted to put (a facility),” Vernier said.

Vernier and Fraulini are both in recovery from drug addictions, which, they say, cost them everything before they turned their lives around.

“I was a drug addict for close to 20 to 25 years,” said Vernier. “I’ve done it all, but my drug of choice was crack for the last eight years of my addiction.”

A veteran of treatment, Vernier was 36 years old when he came out of treatment for the fifth time. From there he went to college and earned a master’s degree in education in counseling and human development from Lindsey Wilson College. He is also a licensed chemical dependency counselor in Ohio and has worked in addiction for nine years.

Vernier had been in recovery for 14 years.

Fraulini earned a bachelor’s degree of science in pharmacy from Ohio Northern University. He practiced as a clinical pharmacist for seven years and as an independent pharmacist for six years.

During that time he broke his femur in a water skiing accident and became addicted to the pain pills he was prescribed.

“Eighty-four percent of people who present for treatment for pain pill addiction, it was originally prescribed to them for a legitimate, medicinal purpose,” Fraulini said.

Fraulini has been in recovery from opiate pain pills for 10 years. He also earned a master’s degree in education in counseling and human development from Lindsey Wilson College.

“You won’t walk through our doors and feel judged,” Fraulini said. “And anyone we hire will follow that philosophy as well.”

Vernier and Fraulini said they have seen both sides of addiction and know what works and what doesn’t when it comes to treatment.

Both Vernier and Fraulini said people started calling Community CTS as soon as the phone was hooked up. The team had intended to open at the beginning of the year, but didn’t want to turn anyone away.

“We’ve had people call just that fast, where they were going from number to the next trying to find someone to help them,” Vernier said.

The two counselors have already done assessments on more than 20 people seeking help from their addiction, some who had lost their fix due to closing pill mills in southeast Ohio.

Although the team’s area of expertise is pain pill and heroin addiction, they will provide all alcohol and drug counseling.

Each new client will be assessed to determine treatment, taking into account family history, demographic information, patient’s history of use, previous attempts at treatment and whether the person has an abuse problem or a dependency problem.

“We are working with several doctors who will help us by prescribing Suboxone,” Vernier. “Suboxone is nothing like Methodone. All it does is blocks (the patient) from being able to get high on a pain pill. We require that if they are going to our doctors that they’ll be in weekly counseling.”

“With Suboxone, an opiate addict will be able to regain a normal life and schedule while being treated with a substance, Suboxone,” Fraulini said. “It stops him or her from experiencing withdrawal symptoms and drug craving while not providing the strong euphoria that’s experienced while using other opiate drugs.

“In a very short period of time you are able to understand what is going … and you can start working on yourself and hopefully mending some of the relationships that you destroyed during the course of your addiction.”

The treatment at Community CTS will be out-patient to begin with, but eventually they hope to include in-patient services as well. For now, the team said they would help people link to in-patient facilities if needed.

Both Vernier and Fraulini said addiction may not be curable, but it is certainly treatable.

“Diabetes is not curable. It’s treatable however,” he said. “To treat it successfully, you take your medication. You change your behavior by changing your diet. Treating addiction follows those same principles.”

In May, Gov. John Kasich signed Ohio House Bill 93 into law, which was designed to combat prescription drug abuse and reduce the widespread prevalence of “pill mills.”

In Ohio, unintentional drug overdoses surpassed motor vehicle crashes and suicide as the leading cause of injury death in Ohio. It has also been reported that the highest rates in the state for these deaths are in southern Ohio, where seven of the 10 counties with the highest death rates are located.

Fraulini said at least three people who called Community CTS for treatment had previously been getting pills from Greater Medical Advance in Wheelersburg, which was shut down Dec. 20 by the Ohio Attorney General’s office, the Ohio Board of Pharmacy and Scioto County officials.

According to a press release by the Ohio Attorney General’s office, 14,000 prescriptions for narcotics came out of Greater Medical Advance in nine months.

The team also said they performed assessments on people who used to come the the center when it was Iron Rock Medical Center.

Community CTS is open from 8 a.m. to 5 p.m. Monday through Friday and is located at 4282 State Route 93. The treatment center accepts Ohio Medicaid and most major insurance.

“We want each and every client to know that we absolutely care about them changing their lives,” said Vernier. “And whatever it takes, we want to try to help them with that. There is hope out there, there is a way. We’ve seen it. There is a way to be clean and not have to live that kind of life.”

The New Year started off with an extra piece of good news as the final figures for the county... read more