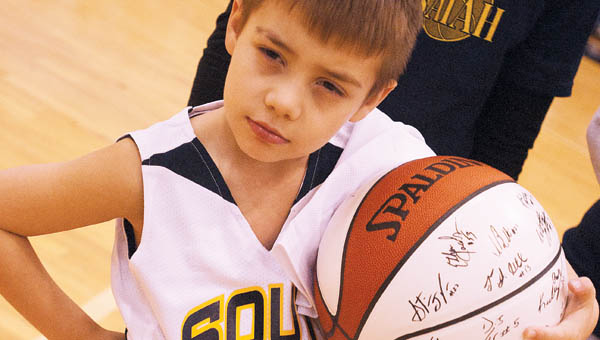 Isaiah Adkins holds an autographed team basketball during Friday’s South Point boys basketball game. Isaiah and his family was presented with a check for more than $5,000 by both South Point and Rock Hill schools Friday evening during their OVC basketball match up. Isaiah suffers from Niemann-Pick disease.

SOUTH POINT — With plenty of time on the shot clock, nothing could stop Isaiah from making that two-point basket Friday night.

Not the hoard of Rock Hill Redmen defenders guarding him on their knees (still a head taller). Not the distraction from a gymnasium full of cheering fans. And not Niemann-Pick disease.

As the youngest player on the South Point Pointers varsity basketball team, and shortest at about four feet tall, 7-year-old Isaiah Adkins’ dreams of playing the sport he loves came true at Friday night’s game against Rock Hill.

Looking proud in his very own official white, blue and gold No. 1 Pointers jersey, Isaiah brought fans from both teams to their feet in an uproar of applause as the ball swished through the miniature hoop, a smile beaming ear-to-ear as he accepted high-fives from both Pointers and Redmen players.

The reality is Isaiah’s rare, debilitating, and ultimately fatal, disease has already begun to take a hold of some of his motor and cognitive functions. Dreams of playing high school basketball just aren’t in the cards for Isaiah.

Knowing this, students from South Point High School began organizing “A Night for Isaiah” to give him some experiences he doesn’t have time to wait for, like fist-bumping his team at the start of a game or adding points to a scoreboard.

Supporters on each side of the South Point gym packed the bleachers, wearing Team Isaiah T-shirts that were sold to raise money for Isaiah’s treatments. Pointers fans sported blue and gold shirts, while Redmen fans donned red and white shirts.

The outpouring of support brought in more than $5,000 for Isaiah, a number that kept rising as people continued to donate throughout the evening.

At halftime, Isaiah was also presented with signed basket balls from both the Pointers and the Redmen, as well as a jersey and signed ball from the Ohio University Bobcats.

“We can be opponents on the court,” he said,.“but when it comes to this disease, we stand together.”

Niemann-Pick disease is a rare genetic disorder in which fatty substances called lipids collect in the cells of the spleen, liver and brain. It has no cure and symptoms and progression of the disease can vary.

Dollarhide said she has seen Isaiah’s symptoms continue to progress over the last year and even day-to-day.

Isaiah is already in the early stages of dementia and he gets emotional and stressed easily. He suffers from vertical supranuclear gaze palsy, which means he must move his entire head up and down, rather than his eyes, to see. His liver and spleen are enlarged and Isaiah also recently had his tonsils and adenoids removed and a feeding tube put in.

Eventually, Dollarhide said, Isaiah may not be able to remember the people around him or his surroundings.

But you wouldn’t know it on this Friday night to see him soak up all the attention from his fans.

The young MVP spent much of the evening hanging out with some high school ladies who tousled his blond hair and praised him for a job well done on the court.

The South Point Elementary first-grader hasn’t been in school for a few months because of his compromised immune system, but hopes to return in March. Classmate Jordan Ermalovich said he was very excited for Isaiah’s return.

“I help him a lot (in school),” Jordan said. “I usually hold his hand going down to the gym.”

A Night for Isaiah brought in many supporters like Jordan who wanted to wish Isaiah and his family well. The event was also a slam dunk for raising awareness of Neimann-Pick.

“I’m glad we’re getting the word out about the disease,” Dollarhide said. “For people to know about it, that’s a blessing in itself.”

To get more information about the disease and current research, visit the National Nienamm-Pick Disease Foundation website at www.nnpdf.org.

CHESAPEAKE — A Proctorville woman accused of stabbing her husband Dec. 29, 2011, waived her right to a preliminary hearing... read more