Tours of architect’s projects next step 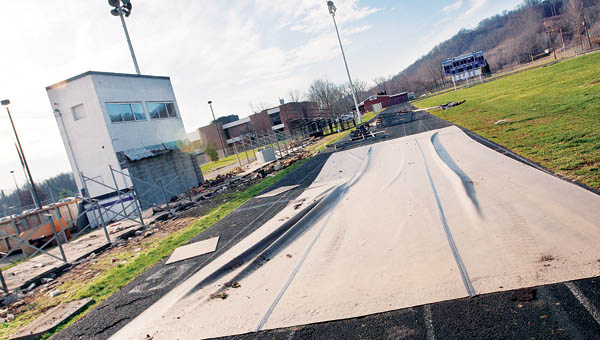 Debris is seen scattered over the old Chesapeake High School track as bleachers and concession stands have been torn down as part of the renovation.

CHESAPEAKE — Chesapeake staff and members of the school community will be taking tours of finished projects by the design firm chosen to build the new athletic complex at the high school.

“We have some administrative people meeting with MSA Sports to take a tour of a few of those buildings to get those ideas of traffic flow,” Jerry Osborne, Chesapeake school board president, said. “And we have a community committee and some of those people will go to some of the other facilities to get some ideas.”

Recently the board chose MSA Sports of Cincinnati to build the athletic complex on the site of the present football field.

“The design is in the process and we want to be able to look at other facilities to glean from that, “ Osborne said. “Demolition is going on as planned. The home bleachers are pretty much gone and the weight room will be torn down this week.”

The new school board met for the first time Monday choosing Osborne as president; Dr. Kim Oxley as vice president and student liaison; and Jerry Frye as Ohio School Board Association liaison. This is the second time for Osborne, whose term expires in 2013, to serve as president.

Oxley and David Bennett, who are returning to the board and Frye and Jeanne Harmon, who are newly elected, were sworn in during the board’s organizational meeting.

“Curt did a wonderful job,” Osborne said. “He was a great asset for the months he was on it.”

CCC board spreading word about levy

CHESAPEAKE — With the 2012 primary ballot less than two months away, the board of directors for Collins Career Center... read more