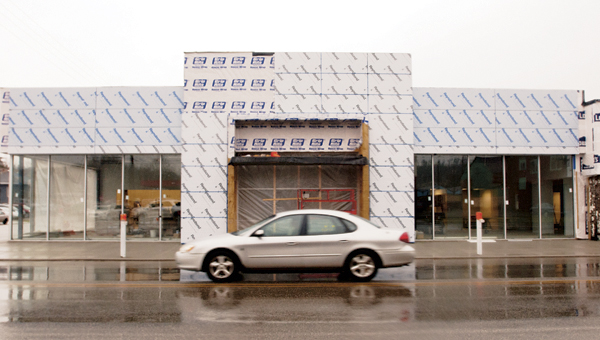 An Ironton business expansion is nearing the home stretch.

Bob Clyse, owner of Bob Clyse Chevrolet Buick GMC, said his new building at the corner of South Third and Quincy streets, across from his existing facility, should be completed by mid-March.

Clyse bought the former Higgins Chevrolet franchise and property in March 2010 and began plans to demolish the old building and replace it with a newer, more modern one. Construction began in August 2011. The result is a showroom and office space that, at 9,000-square feet, is triple the size of his existing building. The new facility will be his main service building as well. It will have a service drive lane with valet service.

“Customers won’t have to park on the street,” Clyse said. “This should make it more convenient.”

Clyse said the best part of his expansion has been the sight of construction workers and others who have helped build his new facility coming and going.

“That’s what has been rewarding,” he said. “Seeing so many paychecks come out of it. I feel good about that.”

Clyse said he was thankful for the 43 years of support that has made the expansion possible.

“I’m excited about it,” Clyse said. “It’s been a long process but I’m pleased to make this investment in our community.”

12-year-old girl was victim   A Kitts Hill man will spend the next five years in prison and 25 years... read more