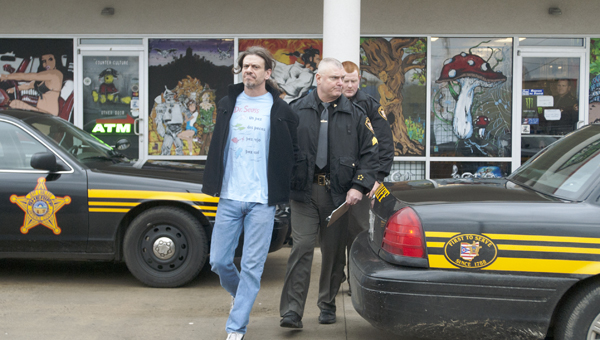 SOUTH POINT — The owner of a tattoo parlor and retail shop got an unexpected birthday present — an arrest warrant from the Lawrence County Drug Task Force.

Robert Holley, who turned 45 on Thursday, was arrested in the morning on charges of drug trafficking. Holley of Ashland is the owner of Counter Culture, a shop in the strip mall near Walmart Way in South Point.

An employee of the store located at 220 Township Road 1013 or Center Street, was also arrested during the raid.

The store was the target of a sheriff’s office and drug task force investigation in November for allegedly selling synthetic marijuana and other analog compounds, the sale of which became illegal in October after the passages of House Bill 64.

“We had had a tip from the public that this synthetic material was being sold,” Lawrence County Sheriff Jeff Lawless said at the scene of Thursday’s raid.

At that time $20,000 worth of these materials were taken and sent for analysis to the Bureau of Criminal Identification and Investigation. The samples were found to contain the synthetic compounds.

“This stuff, if you see someone on it, they are crazy. It is like a heroin high,” Lawless said.

According to the sheriff, since November the materials were no longer displayed on counters, but placed out of sight.

“You had to know what to ask for,” the sheriff said.

The raid started at 11 a.m. with a search warrant. Josh Tackett, described by the owner’s wife as the manager, was the only employee on the premises. He was cooperative with the task force, Lawless said.

During the first part of the raid, Tackett stayed outside the shop talking on a cell phone. At one point, authorities brought him back into the shop.

“He tried to hide material that we had a search warrant for,” Lawless said.

Tackett was then arrested for tampering with evidence.

As the search of the store continued Camillia Holley, wife of the owner, drove into the parking lot in a silver Volvo with South Carolina plates. She remained outside talking on a cell phone.

“They’ve put Josh in handcuffs,” she said on the phone.

Within the hour, Robert Holley arrived at the scene, professing his innocence.

“I have documentation for everything in that shop,” he said. “Everything is legal.”

His comments were interrupted when Lawrence County Sheriff’s Detective Aaron Bollinger approached to arrest him.

As he was put into a cruiser, Holley yelled out, “What about that crack house down the street … I take care of the kids in this neighborhood. I don’t use drugs. I don’t drink. Ten thousand pages of medical research say (it) is safer than Bayer aspirin.”

Holley was arrested Thursday on the search warrant executed in November. There were 2,751 items taken from the store in the raid that investigators believe to be synthetic compounds. Samples of them will be sent to BCI&I for testing.

“Should these items be proven to be illegal by Ohio’s new law, then additional charges will be forthcoming,” Lawless said.

Council holds off on change to city dump program

City officials agree Ironton needs to save money, but there is apparently disagreement on where cuts should be made.... read more