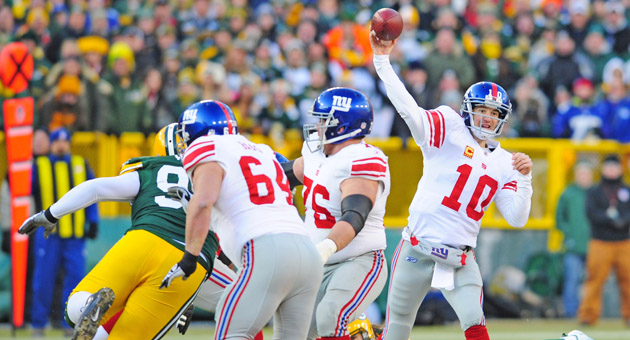 New York Giants quarterback Eli Manning drops back for a pass during the 1st half of his NFC divisional playoff game against the Green Bay Packers on Sunday at Lambeau Field in Green Bay, WI. The Giants won 37-20. (The Ironton Tribune / MCT Direct Photo)

GREEN BAY, Wis. (AP) — For Eli Manning and the New York Giants, Lambeau Field has become a familiar launching pad. After beating the Green Bay Packers at home for the second time in four years, they only hope this trip ends the same way — at the Super Bowl.

Manning threw three touchdown passes and the Giants shocked the Packers 37-20 in an NFC divisional playoff game Sunday. Manning threw for 330 yards, sending the Giants to San Francisco for the NFC championship game next Sunday night.

The Packers (15-2) might have been the reigning Super Bowl champs, but the Giants (11-7) might be the hottest team in the NFL.

“I think we’re a dangerous team,” Giants coach Tom Coughlin said. “I like where we are and how we’re playing.”

The Giants stunned the Packers with a touchdown off a long heave from Manning to Hakeem Nicks just before halftime, then knocked them out with a late touchdown off a turnover. Lambeau Field fell silent as the Giants swarmed the field in celebration, with a handful of New York fans chanting, “Let’s go, Giants!”

The Giants have been on a roll ever since beating the rival Jets on Dec. 24, beating the Dallas Cowboys to get in the playoffs and then blowing out Atlanta in the wild card round last week.

The win came four years after the Giants beat a Brett Favre-led Packers team in the NFC title game. It wasn’t nearly as frigid this time around, and the Packers’ vulnerable defense seemed to be waiting to get sliced up.

“This team knows how to win on the road,” defensive end Justin Tuck said. “It seems like right now it’s our time.”

Manning found six different receivers against a porous Packers defense. But Manning did the most damage with his throws to Nicks, who caught seven passes for 165 yards and two touchdowns.

Nicks’ biggest play was a 66-yard touchdown catch in the first quarter. His score at the end of the half came on a 37-yard pass into the end zone with defenders all around.

“It was a big momentum play for them, but we were not deflated as a football team,” Packers coach Mike McCarthy said.

Nicks said he wasn’t even sure he’d landed in the end zone.

The Giants’ defense also was able to defuse the big-play abilities of Aaron Rodgers and the Packers’ offense.

Rodgers was 26 of 46 for 264 yards, with two touchdowns and an interception. He also was the Packers’ leading rusher with 66 yards on seven carries.

Meanwhile, the Packers’ past problems with dropped balls by their talented group of wide receivers returned at the worst time imaginable.

And while the Packers’ defense has been vulnerable all season, giving up far too many yards and big plays, they’ve typically made up for it by forcing turnovers.

This time, the Packers were the ones giving the ball away.

Green Bay lost three fumbles, including one on a rare giveaway by Rodgers. The Giants also sacked Rodgers four times.

With the Packers trailing 20-10 at halftime but finally beginning to look like themselves on offense to start the second half, Osi Umenyiora swatted the ball away from Rodgers, and Deon Grant recovered the fumble at the Green Bay 37.

But the mistake didn’t cost the Packers points, and Green Bay cut the lead to seven points on a 35-yard field goal by Mason Crosby late in the third quarter.

The Packers put together another drive early in the fourth quarter, but Michael Boley and Umenyiora combined to sack Rodgers on fourth-and-5 in Giants territory.

After carving up the Packers in the first half, the Giants’ offense hit a lull in the second half. But they broke out of it to drive for a 35-yard field goal by Lawrence Tynes to take a 23-13 lead with 7:48 left to play.

Packers running back Ryan Grant then fumbled after catching a pass and the Giants recovered, taking the ball back deep into Green Bay territory.

The Packers then tried on onside kick, but the Giants’ Victor Cruz recovered.

New York’s Brandon Jacobs scored on a 14-yard run with 2:36 left to put the game away.

It was an emotional day for the Packers, who welcomed back offensive coordinator Joe Philbin for Sunday’s game — two days after the funeral service for Philbin’s 21-year-old son, Michael.

Joe Philbin had been away from the team all week after Michael Philbin’s body was recovered from an icy river in Oshkosh, Wis. on Monday. A preliminary autopsy showed that he drowned.

“I think deep down, a lot of us wanted to kind of get this one for him,” Rodgers said.