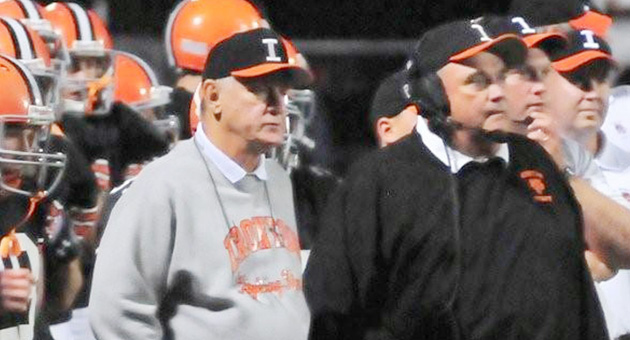 A legend is calling it quits.

“Bob Bruney got Ironton on the winning track but Bob Lutz took it to another level,” said Mike Burcham who served as an assistant to Lutz for all but one season. Burcham was also the athletic director who recommended the school board hire Lutz.

Burcham also said he was retiring from coaching.

Lutz said he appreciated all the support the program received from the people of Ironton and all the Fighting Tiger fans.

“I was fortunate to have a lot of good assistant coaches who worked hard and knew the game,” said Lutz. “I’m hoping those younger coaches will take the program and go with it. If they do, the program will be in good hands.”

Lutz said the list of people to thank was endless.

“Mike Burcham has been my right-hand man and I thank him for all his help.. But there were a lot of people involved throughout the years. It goes all the way to the Tiger Clan, the fans, the businesses that support us, the people behind the scenes like Sam and Penny Heighton, teachers, administrators, students, parents, doctors, managers, trainers, and especially all the players who worked hard to continue the tradition.”

Conflicts with administrators led Lutz to quit after the 2005 season but he admitted he still had a desire to coach.

Merrill Triplett — a former Ironton player for Lutz — coached in 2006 and guided Ironton to a 6-5 record and the school’s other playoff appearance.

Triplett left for Portsmouth West in 2007 and Lutz was asked to return.

“When I started coaching I always said that the best players would play,” said Lutz. “There were a lot of kids I really liked that I didn’t play because they weren’t as good as others.”

A 1961 graduate of St. Joseph, Lutz signed with Marshall University and was slated to start the in secondary as a freshman when a knee injury ended his playing career.

With five lettermen returning and picked last in the Ohio Valley Conference pre-season poll, Lutz guided the Flyers to the OVC championship. St. Joseph finished second the following season and earned a three-way share of the title in 1971.

Bruney left Ironton to coach his alma mater Martins Ferry and Ironton hired Larry Coyer. However, Coyer was hired as an assistant at Massillon the next day and left the Ironton position open once again. This time the board went with Burcham’s original recommendation and hired Lutz.

The rest is history.

So, who’s the heir apparent? When Bob Lutz stepped down on Monday as the Ironton Fighting Tigers’ head football coach... read more