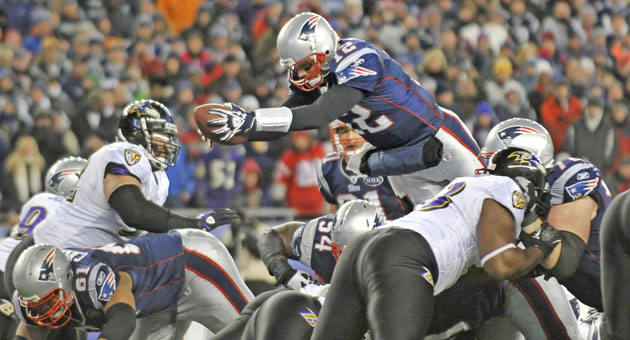 FOXBOROUGH, Mass. (AP) — Tom Brady got all the help he needed to get the New England Patriots into the Super Bowl.

The Baltimore Ravens kicker shanked a 32-yard field goal with 11 seconds left and the Patriots escaped with a 23-20 victory in the AFC championship game on Sunday.

Usually, vintage Brady doesn’t need much assistance in championship settings, but the Patriots much-maligned defense came through, and Brady’s 1-yard touchdown dive with 11:29 left proved to be the winning points.

“Well, I sucked pretty bad today, but our defense saved us,” Brady said after throwing for 239 yards, with two interceptions and, for the first time in 36 games, no TD passes. “I’m going to try to go out and do a better job in a couple of weeks, but I’m proud of this team, my teammates.”

Brady waited out the final tense minutes on the sideline, and then celebrated with the rest of his team when Cundiff’s attempt went wide left. The Ravens looked on in stunned horror.

Next up as the Patriots (15-3) chase their fourth Super Bowl trophy in Brady’s and coach Bill Belichick’s tenure in New England is the winner of Sunday’s NFC championship game between the Giants and 49ers. The Super Bowl is Feb. 5 in Indianapolis.

In their last trip to the big game, the Patriots had an 18-0 record when they were stunned by the Giants four years ago. They won the NFL championship for the 2001, 2003 and 2004 seasons. This time, they head to the Super Bowl with a 10-game winning streak.

“We’re going to try to go out and kick some butt in a couple of weeks,” said Brady, whose fifth trip to the Super Bowl will equal John Elway’s achievement with Denver.

On his touchdown, Brady took a huge hit from Ravens star linebacker Ray Lewis, then emphatically spiked the ball as he walked away. Earlier, Brady showed his fire by barking at Lewis following a hard tackle on a 4-yard run.

“It’s a pretty mentally tough team,” Brady said. “There’s really some resiliency, we’ve shown that all season. Even in the games we’ve lost, the three games we lost, we fought until the end. We’re always going to fight to the end. It’s great to be a part of a team like this.”

Before Cundiff missed, the Ravens had a chance to go ahead two plays earlier, but wide receiver Lee Evans was stripped of the ball in the end zone by backup cornerback Sterling Moore, who earlier was victimized for a touchdown that gave Baltimore (13-5) the lead 17-16.

When Cundiff misfired, and the Patriots stormed off their sideline in celebration as the chilled crowd roared, and Ravens coach John Harbaugh appeared to say “He missed it.”

“It’s a kick I’ve kicked probably a thousand times in my career,” Cundiff said. “I went out there and didn’t convert. That’s the way things go. There’s really no excuse for it.”

Baltimore had the touted defense in this matchup, but New England’s unit, ranked 31st overall, was just as powerful.

“We stepped up,” Pro Bowl nose tackle Vince Wilfork said. “We all stepped up big time. Being in this situation is a great moment. You have to cherish this moment.”

The Patriots shut down Ray Rice, the league’s total yardage leader, who was limited to 78 yards. Brandon Spikes made a fourth-quarter interception of Joe Flacco, who played well before that and threw for two touchdowns. And when the Ravens were threatening to score a late touchdown to win their first conference title in 11 years, New England clamped down.

With Rice a nonfactor, Baltimore had to rely on Flacco, and he delivered one of his best performances. Flacco has led the Ravens into the playoffs in all four of his pro seasons, but not to the Super Bowl. He was 22 for 36 for 306 yards and touchdowns of 6 yards to Dennis Pitta and 29 to rookie Torrey Smith.

The loss hardly could be blamed on Flacco.

“I don’t know if I ever will prove anything,” he said. “I just play the same way. We lost; someone has to. But we laid it all out on the field.”

Operating against a porous secondary missing its top cornerback, Kyle Arrington, who left in the second quarter with an eye injury, Flacco gave Baltimore its first lead. His short pass on third down to explosive receiver Smith turned into a 29-yard scamper down the right sideline after Moore completely whiffed on the tackle.

Danny Woodhead’s fumble on the ensuing kickoff set up Baltimore at the Patriots 28, but a third-down sack forced Cundiff to kick a 39-yard field goal, making it 20-16.

Brady took the Patriots 63 yards in 11 plays, and seemed to score on a 1-yard run. The call was overruled by replay, though, and on fourth-down, he dived just high enough over the line for the winning points.

Defense was particularly dominant early on. The Patriots held Baltimore to minus-4 yards on its first three first-down runs and forced the Ravens to go three-and-out each time. Meanwhile, the Patriots put together a methodical 13-play, 50-yard drive helped greatly by an illegal contact penalty on Lardarius Webb that negated a tipped interception by Bernard Pollard.

But Brady was sacked for the first time by Paul Kruger and Stephen Gostkowski kicked a 29-yard field goal.

Late in the first quarter, the Ravens changed tactics after Webb picked off a pass intended for Julian Edelman at the Baltimore 30. Flacco rolled right on first down and threw deep down the sideline to a wide-open Smith. Had the pass not been short, Smith likely would have sprinted into the end zone. Instead, it was a 42-yard gain, not bad at all given Baltimore’s previous ineptitude with the ball.

Brady, perhaps peeved by his poor throw that Webb picked off, hit two passes for 29 yards on a 75-yard drive to make it 10-3. BenJarvus Green-Ellis rushed for 36 yards on that series, and also drew a personal foul against Webb, who ripped off the running back’s helmet on a short rush. Green-Ellis surged into the end zone from the 7, then pointed to the patch on his jersey honoring Myra Kraft, the late wife of Patriots owner Robert Kraft.

In the locker room afterward, Kraft was asked about the motivation the team got from dedicating the season to his wife of 48 years. Kraft tapped an MHK pin on his left lapel and kissed his fingers before pointing upward.

Going back to the pass, the Ravens tied it on a 6-yard throw to Pitta — yes, Baltimore has some dangerous tight ends, too — that concluded an 80-yard march. Flacco opened the drive with a 20-yard completion to Evans and then Anquan Boldin escaped Arrington’s attempted tackle to gain 37 more yards on a reception. Flacco was finding holes in New England’s coverage, particularly when he moved out of the pocket.

New England’s All-Pro tight end Rob Gronkowski made an error at the end of a 63-yard drive, failing to keep two feet in bounds on a catch. Gostkowski’s 35-yard field goal made it 13-10.

Gronkowski left for a while with a left leg problem, but soon returned.

“It doesn’t even feel right, especially playing with the veterans here,” Gronkowski said. “I watched them go to the Super Bowl as I was growing up and now I’m part of it? It is an unreal moment.”

Notes: Brady won his 16th career postseason game to tie Joe Montana for most in NFL history. … New England’s seventh Super Bowl appearance puts it one behind Pittsburgh and Dallas. … The Patriots are 7-1 in AFC title games, 4-0 at home. … Brady and Belichick are the first QB-coach combination to win five conference championships in the Super Bowl era. … Baltimore was 7-0 against playoff teams this season before Sunday’s loss. … The Ravens finished 4-5 on the road. … In three career games against the Patriots, Rice averaged 145.7 yards, nearly double what he managed Sunday.

SAN FRANCISCO (AP) — The New York Giants have their own Super Bowl formula: in overtime and on the road.... read more