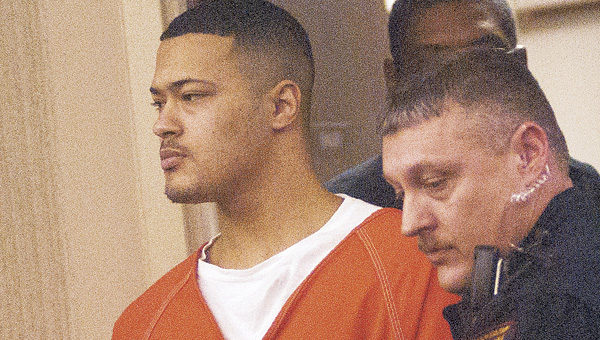 In front of a crowded Lawrence County Common Pleas courtroom Wednesday afternoon, a Huntington, W.Va., man pleaded guilty in connection to the death of an Ironton man this past summer; his guilty plea, though, was to a lesser charge.

Charles Edens, 22, pleaded guilty to voluntary manslaughter in the death of Auston James Wells, 19. Edens had initially been charged with murder, but at the behest of special prosecutor Paul Scarsella, the indictment was amended to the lesser charge.

Scarsella told Judge D. Scott Bowling that on the night of Aug. 31, 2011, there was an altercation in front of a residence, on Eighth Street. Wells, who was inside the residence went outside and approached Edens and the other person having the argument. Scarsella said Wells had a gun and so did Edens, who shot Wells several times.

“He (Edens) turned himself in. He told authorities where they could find the gun,” Scarsella said of Edens. He added that at the time of his arrest Edens had “injuries consistent with a physical altercation.”

Reading from Ohio Revised Code, Bowling asked Edens if he pleaded guilty to “knowingly causing the death” of Wells “under the influence of sudden passion or a sudden fit of rage.”

Bowling set sentencing for Feb. 9 and ordered a pre-sentence investigation.

The maximum sentence for voluntary manslaughter is up to 11 years in prison, up to a $20,000 fine and five years of post release control (probation). However, Edens admitted to using a gun to commit his crime. The gun specification adds an additional three years that must be served consecutively to the voluntary manslaughter sentence.