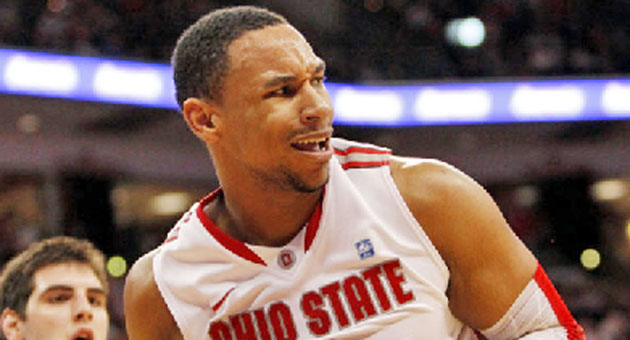 Ohio State's Jared Sullinger had 20 points and 13 rebounds to lead the Buckeyes 78-54 rout of the Penn State Nittany Lions on Wednesday. (The Ironton Tribune / Courtesy of Ohio State Sports Information)

COLUMBUS (AP) — Aaron Craft took a dribble or two past midcourt and launched an alley-oop pass toward teammate Sam Thompson, who was approaching the rim from the left wing.

Thompson never got the pass: It went straight in from 35 feet.

It was that kind of night for No. 4 Ohio State, which got 20 points and 13 rebounds from Jared Sullinger and took advantage of Penn State’s slow start to roll to a 78-54 victory on Wednesday.

“That was executed well,” coach Thad Matta joked of the backdoor pass that hit nothing but net.

Craft, who finished with 11 points, could only laugh about his unintentional 3-pointer.

“Well, I got pretty lucky,” he said. “For the record, I would much rather that Sam catch it and dunk it. People get more excited about that. But I’ll take anything I can get. It was awesome.”

With a straight face, Thompson said it was a set play.

“Everything kind of went according to plan; that was just how we drew it up,” he said. “I was going to streak down the left side and Craft was going to throw it up from about halfcourt and it was just going to go in. I was kind of like a decoy.”

That was just an example of how easily things went for the Buckeyes (18-3, 6-2 Big Ten), who won their third in a row and fifth in six games while getting ready for Sunday’s big home showdown with No. 20 Michigan. The Wolverines, Ohio State and Michigan State came into the week tied for the top spot in the Big Ten.

“It was a great tuneup,” Sullinger said. “We’ve got Michigan coming up next. We’re just going to focus on them and getting ready to play.”

The Nittany Lions paid tribute to Joe Paterno by wearing black bands on their jerseys. Paterno, Penn State’s football coach for 46 years and the winner of a major-college record 409 games, died Sunday at age 85. A public viewing and funeral was held earlier on Wednesday.

Big Ten scoring leader Tim Frazier had 16 points and Jermaine Marshall 14 for Penn State (10-12, 2-7), which has lost its last 17 meetings with Ohio State.

The Buckeyes scored the first eight points and led 15-2 with almost 8 minutes gone.

“Ohio State had a lot to do with that,” Penn State coach Patrick Chambers said. “Even though they don’t have the shooters they had last year, collectively as a unit they play very hard and they defend. Every shot was contested, and they sped us up.”

Matta said his young team, with only one senior (Buford), seems to be grasping what it takes to win and win big.

“A lot of times, the focus especially as you start a game is where are we mentally, where are we emotionally, where are we energy-wise, where are we intensity-wise?” Matta said. “Those are things we’re trying to teach this young basketball team. They’re doing better at understanding. Getting off to a great start tonight was very advantageous for us.”

The Buckeyes improved to 15-0 at home this season while running their home winning streak to 37 in a row — the second-longest streak in the country behind Kentucky’s 47 straight.

“There’s a lot of time for us to get better,” Craft said. “That’s what we’re trying to focus on, to get better every day and come out and try to play as hard as we can in games.”

Already ahead 38-18 at halftime, Ohio State benefited from a flagrant foul and a technical foul against the Nittany Lions in the opening 2 minutes of the second half.

Frazier was called for the flagrant foul when he swung an elbow that caught Craft in the jaw. Moments later, Chambers was whistled for yelling at the officials.

In the waning moments of the game, Ohio State’s student section prepped for the game against the Buckeyes’ chief rival by singing “We Don’t Give A Damn For the Whole State of Michigan.”

Penn State endured a miserable first half, shooting just 22 percent (7 of 32) and falling behind by as many as 23 points.

Frazier was dogged wherever he went by Buckeyes defenders. He was 2 of 9 from the field at halftime and finished 6 of 17.

“Aaron was extremely effective,” Matta said. “(Frazier) had six points with 12 minutes to go. Aaron likes a good challenge and Tim Frazier is definitely a heck of a challenge.”