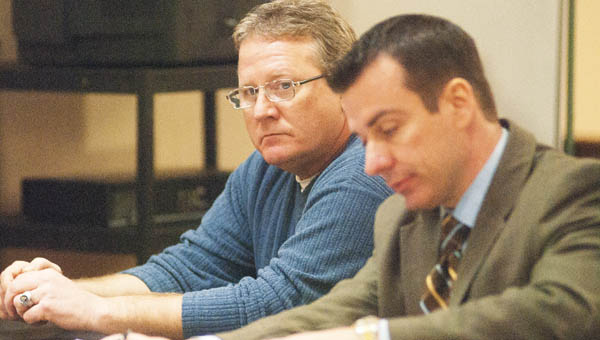 CHESAPEAKE — A former Chesapeake councilman will not spend any time in jail following a plea agreement that reduced six misdemeanor charges down to two.

In Lawrence County Municipal Court Friday afternoon, Scott Taylor, 43, pleaded guilty to resisting arrest and disorderly conduct stemming from an incident at his former home on Second Avenue in the village in April.

At that time Taylor was arrested by sheriff’s deputies after neighbors complained that he had spoken multiple obscenities to them, threatened to kick their pets and made an obscene gesture.

Then he was charged with disorderly conduct, aggravated menacing, criminal trespassing and resisting arrest.

About a month and a half later Taylor was arrested again after his then wife, Julie, contacted village police saying that her husband had held her down against her will. During that incident his wife also said she found a marijuana cigarette on the backyard grill.

Assistant Prosecutor Brigham Anderson said that in a plea agreement made in the judge’s chambers before the trial was to start, the aggravated menacing and criminal trespassing charges and marijuana possession citation would be dismissed if Taylor pleaded guilty to resisting arrest and disorderly conduct.

“The domestic violence charge is dismissed at the request of the victim,” Anderson told visiting Meigs County Judge Steven Story.

After Taylor made his pleas, Story sentenced him to 90 days in jail, with all time dismissed; one year of probation; $200 fine for resisting arrest and court costs for disorderly conduct.

“After consulting with the victims, we felt this was a just result,” Anderson said after the hearing.”

Friday’s trial would have been the fifth time the Taylor case was scheduled to come before a judge.

Taylor, represented by attorney Tyler Smith, had no comment to make afterwards, except to say he was now living out of state.

In November, Taylor, who had been a write-in candidate in 2009, was removed from council for missing three meetings, the maximum number allowed. In January Mayor Dick Gilpin appointed Paul Nathan Hart to Taylor’s spot, after council did not make a decision in December. Hart had run for a third term on council but was defeated.

Gilpin, who had been called as a witness, had no comment about the disposition of the case.

JACKSON — The trial of an Oak Hill man charged with vehicular homicide in the death of a South Point... read more