In his 92 years, Harold Spears has had what he calls “an adventuresome life.”

As a WWII Navy combat veteran, Spears can remember seeing the American Flag raised on Iwo Jima when he was stationed in the Pacific.

As Lawrence County Prosecutor in the 1950s, Spears was integral to cleaning up the county of its Mafia syndicates, burglary rings, gambling, prostitution and more.

But before all that, he experienced what many called the greatest flood in Ohio Valley history.

In 1937, Spears was a senior at Ironton High School and lived at 611 Railroad St. with his family. His father owned Spears Pharmacy on South Third and Chestnut streets, where The Barker Shop is today.

Spears recalled the days before the flooding as a rainy spell where people continued to go about their day-to-day business. He also recalled forecasts that the Ohio River would max out at a crest of between 50 and 60 feet. These were the days before Ironton had a floodwall.

“My dad, along with everyone else, was carefully watching, listening for predictions on the radio,” Spears said. “When the water rose to 50 feet, people began to make moves.” 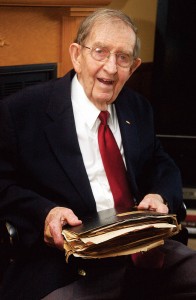 The elder Spears decided to take precautions with the business. He used concrete blocks to jack up the wooden and glass cabinets that housed medications and products in the pharmacy.

He also hired Blackwell Moving Co. to move some of the business to a place on Seventh Street that they rented during the flooding. Spears and his older brother also helped by packing their cars full as well.

“We moved as much as we could out, all the things my dad thought was necessary for the health of the people,” Spears said.

The Spears’ Seventh Street haven stayed dry, but Spears’ father was concerned of another threat.

“My dad said he was concerned someone would find out that we moved the narcotics,” Spears said. “We would have to protect ourselves. We would have to be prepared to defend the place.”

“I sat up all night with dad’s shotgun on my knee,” he recalled.

When the water was high, the river was a raging torrent, Spears said. Many of the dry homes were filled with several families who had nowhere else to go.

Some people used boats to drift to one of the “islands” that still had grocery stores.

Many people had trouble finding food, and the danger of fire was ever-present since candles and oil lamps were used.

Spears said he couldn’t recall exactly how long his family stayed on Seventh Street, but it was at least a month.

When the waters receded they went to survey the damage at Spears Pharmacy.

What was remaining in the store was either swept away or in piles on the floor. Inches of mud covered the floors and the wooden and glass cabinets were overturned and broken.

The damage nearly bankrupted his father, Spears said. Many of the prescriptions had been destroyed. His father had to peel labels off of the bottles that were left so he could get credit and replacements.

“The dampness was a terrible thing,” Spears remembered.

To clean the pharmacy, Spears recalled wearing rubber boots and shoveling mud into buckets and hosing everything off; a long process.

“The time of year was not conducive to quick drying-out,” he said.

His family was able to make repairs to the store and send in enough bottle labels to start the business up again, but the process did set his father back quite a bit, Spears said.

Ironton attorney stays elections’ board chair Democratic Party Chair Craig Allen has been nominated for his third term on the... read more