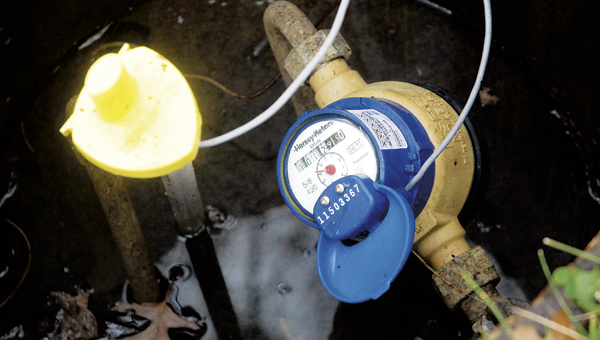 New water meters are now being used throughout the city of Ironton.

They may not be seen as glamorous departments with exciting and dramatic job duties, but the men who supervise streets, water works and the city’s sanitary sewer system got the chance to discuss their vital operations with the Ironton City Council Finance Committee Thursday.

Their discussions are part of the committee’s information gathering as the city prepares the 2012 budget.

It’s not the subject most people even think about: what happens after you flush the toilet. The nine employees at the city wastewater treatment department make it their job to think about it.

They are responsible for 60 miles of sanitary and combination sewer lines, additional storm sewer lines, approximately 1,100 manholes, and approximately 1,400 catch basins, as well as the wastewater treatment plant, according to information director John Haskins supplied committee members at Thursday’s meeting.

The wastewater treatment plant is an enterprise fund, operated entirely with stormwater and sewer fees.

“Due to hydraulic testing and operational changes, the wet weather flows reach 4 million gallons per day, exceeding the design but we are able to achieve primary treatment for the additional gallons before discharging to the Ohio River. Wet weather flows are the result of combination sewers where sanitary and storm are combined together into one pipe,” Haskins said in his written report to the committee.

The wastewater collections employees are also responsible for maintaining some 200 backflow preventers.

“Are they beneficial in solving the problem?” Waldo wanted to know.

“We’ve not had a complaint about sewage backup since,” Haskins said.

Haskins’ office is also responsible for street sweeping. He told the finance committee the street sweeper is operated eight hours a day, five days a week except in the winter during harsh weather.

“The street sweeper sweeps the downtown and main routes into town daily, sweeps the combined sewer overflow areas weekly and sweeps the residential areas once a month,” Haskins told the committee.

Additional street sweeping is performed during all public events. All cost associated with the street sweeper is paid from wastewater including the dumpster for disposing of debris.

White said the new Nixon Hill water tank accounts for a huge chunk of savings in his office.

“Before the tank we were putting out 62-65 million gallons a month, now we’re putting out 42 million,” White said. White said Friday he did not have firm figures on how much money the city is saving by not having to process as much water.

White told the committee with the water tank in place, he would like to turn his attention to replacing the city’s water lines, which are old and in need of constant repair.

“Usually we fix one leak a day,” he said.

“What kind of difference have you seen with the new meters?” Waldo asked White.

White said the new meters, 95 percent of which have already been installed, are so hi-tech they are able to detect all water usage and some people who did not know they had a leak are learning the hard way that they do.

White said he thinks the new meters will increase revenue by 25 percent simply because they are newer, more efficient and better able to track water usage than the antiquated meters they are replacing.

“The old meters weren’t picking up the leaks, the new ones do,” White said. “The new meters pick up 100 percent (of the amount of water used). They should pay for themselves.”

White said he has six employees now who read meters 5-7 days a month.

“What are these employees doing when they are not reading meters?” committee member Aaron Bollinger asked.

“Prior to the new meters, was this kind of work backed up?” Bollinger asked.

White said it was.

White said he would like to conduct a mass shutoff of all households not paying their water bill. White said Friday he had mailed out 1,200 shut-off notices earlier this month and all but 200 or 300 customers had paid their bills.

White said he had been doing the mass shut offs but had to stop when he encountered the recent problem with the new water meters not operating correctly.

In may be safe to say Mike Pemberton knows every mile of asphalt in the city. He is, after all, the superintendent of streets. He also supervises trash collection and is the floodwall superintendent.

Pemberton said the number of his employees has been cut in half since 2004.

Pemberton would like to replace a 2002 truck and has $80,000 in one fund to pay for it and may be able to get financing.

“Kristen (finance director Martin) said I could do a note on it,” Pemberton said.

“What do the people in the street department do in winter?” Waldo asked.

As for the floodwall, Pemberton said it is getting older and needs attention.

“I’d like to see us start a program and upgrade a pump station every year until we get all new,” Pemberton said.

It is not a city department but E.L. Robinson engineering sent a representative to the finance committee meeting.

Leighty said his firm worked on a street sewer that had collapsed, on the Nixon Hill hillside slip. His office has also conducted bridge inspections (the city has four, not including the Ironton-Russell Bridge, which is owned and maintained by the state.

“Where are we on Ora Richey?” Lutz asked.

The initial cost of the project is a half million dollars. Leighty said the city is paying for approximately $14,000 of work that was done early on in the project.

The city will meet now with other department heads at a 5 p.m. meeting Thursday and another meeting at 9 a.m. Saturday. A budget must be in place by the end of March.

CHESAPEAKE — The gambling case against two Chesapeake village councilmen has ended in a fine for one and charges... read more