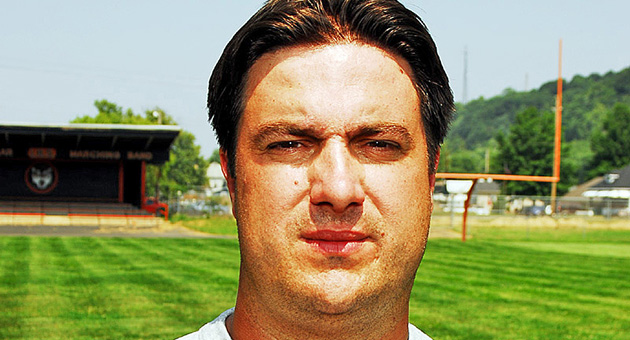 The past meets the future.

A familiar face in the Ironton football program will now lead the Fighting Tigers into the future following the hiring of Mark Vass as the new head football coach.

Vass was hired Sunday by a 5-0 vote in a special meeting of the Ironton City Schools Board of Education to succeed legendary Bob Lutz who retired following a 42-year career that saw him set the Ohio all-time record for wins at 381.

“I don’t plan to re-invent the wheel,” said Vass. “The system is in place. The players know it really well. I don’t want to lose the toughness and physical play that Ironton has always had.

“At the same time, I’ve gained a lot of experience from other programs. I’ll implement what I’m comfortable with to our program. It’s been successful for 39 or 40 years, so there’s no need to change everything. But I do want to put my stamp on it. We just need to be precise and execute.”

Ironton athletic director Mark LaFon said it became apparent during the interview process that Vass was the right coach to carry on the great tradition.

“It was obvious speaking with him and interviewing him you could tell his passion for the job is there,” said LaFon. “When he first came to Ironton, one of his reasons to come back was to coach.”

“Knowing him through the years I got the feeling of his genuine desire to be the head football coach. I decided to recommend him through that association and through coach Lutz who made a recommendation as well,” said LaFon.

“I feel 100 percent confident in him. It has to do with the right fit. It’s the same in college and professionals. Mark is definitely the right fit. I feel we have the right candidate in Mark.”

A 1993 graduate of Ironton High School, Vass played for the Fighting Tigers’ 1989 state championship team and was the starting quarterback as Ironton made the playoffs in 1991 and 1992.

Vass later played at Marshall from 1992-93 and was on the 1992 NCAA Division I-AA national championship football team.

He transferred to Baldwin-Wallace College in 1994 and was the starting quarterback the following season.

He set a single-game completion record as he threw for 254 yards and helped the team to an OAC title.

He began his coaching career as an assistant at Cuyahoga Heights High School for two years in 1996. He then was the quarterback coach at Iona College in New York from 1998-99. He spent the next three seasons at the wide receivers coach at Otterbein College and served in the same capacity at Heidelberg College from 2001-02.

Vass was the defensive backfield coach at Marietta College the next two years before returning home as an assistant coach at Ironton in 2003. He took a teaching job at Portsmouth West from 2005-06 and was hired as an assistant football coach.

He returned to Ironton in the fall of 2006 as the athletic director for three years and has been an assistant football coach since 2007.

Vass appreciates the opportunity to be the head coach and the support he has received.

“I want to thank the school board and the administration for their support and their confidence in me. Every successful program starts at the top and I’m looking forward to working with them,” said Vass.

“I also want to thank coach Lutz and coach (Mike) Burcham for all they have done for me. Coach Lutz has taught me a great deal and has been very supportive. I look forward to carrying on what he’s built.”

Vass said he plans to meet with prospective staff members in the near future and begin preparation for the next season.

“I know what I’m getting into. I know what I’m doing is going to be very hard. But I’ve got good people around me. I’m putting together a good staff that’s experienced and who know the game,” said Vass.

“I hope the town and the community will support me and the program. I’m looking forward to it.”

Vass inherits a program that not only won almost 400 games under Lutz, but also qualified for 28 playoff appearances, won two state titles, made 10 trips to the state semifinals and finished runners-up on six occasions.

“Number one, I’m excited. I really want to do this. But I know this is a tremendous challenge. I grew up in the program and I know the tradition it’s had year in and year out. I look up to those guys. I know what it takes to make the program so successful,” said Vass.

“I’m not going to be coach Lutz. But I’ve learned from him and other coaches from where I’ve been. I just want to continue in the right direction. The blueprint is there. They system is there. We just need to work hard and keep it going.”

Vass and his wife, the former Brooke Anderson, have two children, a son, Maddox, 5, and a daughter, Malee, 4.

Fairchild was epitome of a true gentleman

If there ever was a person who was the definition of a classy gentleman, Webster’s Dictionary would only simply have... read more