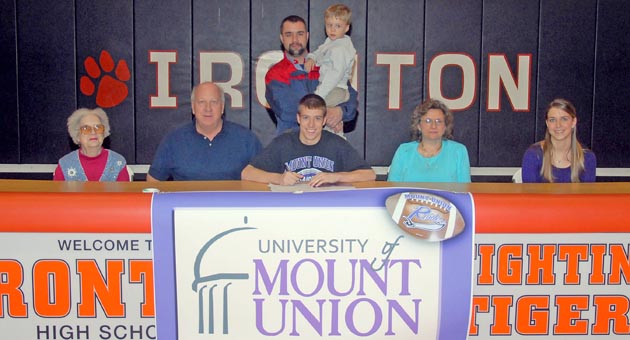 Mount Union is the small school with big production.

Despite his 5-foot-9, 150-pound status, Kratzenberg always played big. That made him the right kind of player for the University of Mount Union and led him to sign a letter-of-intent with the Purple Raiders on Wednesday.

“Of all the schools I talked to, this felt right. It feels the most like home even though its four and a half hours away,” said Kratzenberg. “They have great tradition, a covered stadium, and (head coach Larry Kehres) was like coach (Bob) Lutz. He was on me because I could do better and doesn’t sugarcoat anything. I like that.”

Kehres has amassed an amazing 303-23-3 record in 26 seasons that includes 21 Ohio Athletic Conference championships and 10 NCAA Div. III national titles. He has a 69-12 playoff record. He was recently named the Ohio College Coach of the Year for a record eighth time, surpassing Jim Tressel.

Kratzenberg went to the Mount Union football camps since his sophomore season and got to know Kehres and the other coaches.

“I brought some guys to camp with me last summer and (Kehres) expected me to be a leader at camp. He always kept in touch and they showed the most interest,” said Kratzenberg.

“(Kehres) saw me in warm-ups my sophomore year and said I looked like a natural athlete and that he was going to be watching me.”

Kratzenberg led Ironton in interceptions in each of the last two seasons. He is a two-time all-district selection including a first team pick last season. He was named to the Associated Press All-Ohio Division IV team as a special mention choice.

As a junior, Kratzenberg showed his versatility by catching a touchdown pass with an outstanding over-the-shoulder diving grab in the Division IV regional championship game.

“Tyler is a tough kid. He’s not real big, but he’ll come up and hit you,” said Ironton former head football coach Bob Lutz. “He’s a good athlete. He’s got some versatility and he has good hands. He’ll work hard and he’ll be a good player at whatever position he plays.”

Kratzenberg said he has been given the option to choose a position on offense or defense. In fact, he said they would like to see him work on both sides of the ball.

“I’ll start at slot back. That will be a good fit for me. The next spot I’d play is safety,” said Kratzenberg.

“As a quarterback, I don’t et to block that much and I miss the hitting. They told me I could try three days on offense and then three days on defense. I feel like I can contribute wherever I play.”

He is the son of Kathy and Jim Kratzenberg of Ironton.