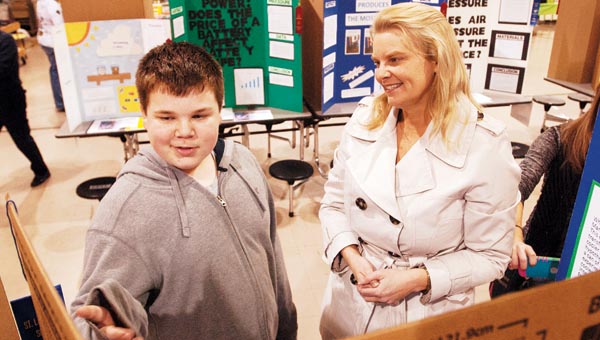 Sixth grader Ryan Scaife explains to his mom Lyn Scaife his project on Cooling a Can of Soda during the St. Lawrence Academic Fair Wednesday. Ryan will be present his project during the Lawrence County Science Fair today at Dawson-Bryant Middle School.

What is the fastest way to cool soda? Ryan Scaife found out the answer is to put the cans of soda in a cooler filled with ice and water.

“You have to add the water,” his mom, Lyn said.

“The water increases the molecules and thus the interaction,” Ryan agreed.

This knowledge earned Ryan a superior rating in Wednesday’s St. Lawrence Elementary School Academics Fair. His was one of five that earned a top rating that will now allow them to advance to the county science fair at Dawson-Bryant Middle School today.

Isaac Whaley’s project “Does the air pressure in soccer balls affect bounce?” earned him a superior rating. Whaley bounced a soccer ball at various stages of deflation to determine the more air in the ball, the better it will bounce.

Clay Willis wanted to know if sugar substitutes are indeed as sweet as sugar. Friends and family were given glasses of lemonade with either sugar or a substitute to make the determination. The answer: Some substitutes are as sweet though some are not. This earned a superior rating.

Chase Walters asked if dark colors would affect heat absorption. Using squares of fabric in different colors and ice cubes, Chase determined, ice melts at a faster temperature when it is on dark fabric.

Lauren Bush explored the subject of mnemonics — using catchy phrases or words to remember things such as grocery lists. After assembling two test groups and allowing one group to use mnemonics to memorize things, her conclusion was affirmative.

With five of 23 projects earning a superior rating, fifth grade teacher Jennifer Collins concluded, “They’ve done an excellent job.” Collins and sixth grade teacher Tonya Waller organized the fair. It was meant to teach the students to use the scientific method.

It may not have won an award but it did earn Grandma’s approval — kind of. Emma Williams’ project centered on ants. Her grandmother, Connie Massie, was on hand Wednesday night for the school’s open house and to see the fair exhibits. She proudly stood by as Emma explained her project.

While she was glad Emma was learning by doing, she was put off a bit by the thought of those little critters.

Tonnage bill could have local effect

Ohio roads may be the victims if Congress decides to increase nationally the tonnage limit on roads and bridges. Today... read more