Super Bowl has plenty of matchups 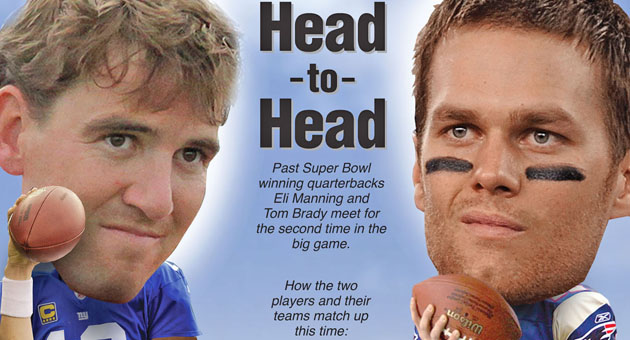 INDIANAPOLIS (AP) — MVP quarterbacks on marquee franchises. A rematch of a nail-biter from four years ago, featuring many of the same key characters. Madonna and plenty of Manning — Eli, and Peyton, too.

This Super Bowl certainly has all the makings of another thriller, the perfect finish to a season that began in turmoil and wound up the most successful in league history.

The NFL couldn’t have planned it any better.

“It’s actually been a very fun week here,” said Patriots quarterback Tom Brady, seeking his fourth Super Bowl ring in 11 seasons, and doing it in the city where archrival Peyton Manning has worked for 13 years — if not for much longer, given his health issues and disagreements with Colts management. “It’s a bit surreal to be playing in Indy’s home stadium and to be practicing at their facility.”

It’s been even weirder for Eli Manning to have led the Giants here, only to find his superb season and chase for a second championship overshadowed by big brother.

The most popular storyline this week has been Peyton’s pain in his neck. Or, rather, his status following three neck surgeries in 19 months; whether the Colts will keep him around, at the cost of a $28 million roster bonus due in March; and whether he’s truly feuding with owner Jim Irsay’s rebuilding organization.

Eli, who will surpass his brother for NFL titles with a victory Sunday at Lucas Oil Stadium — yes, Peyton’s Place — claims his sibling’s issues are irrelevant to this game, in which New York (12-7) is a 3-point underdog.

“I’m proud of Peyton. I’ve talked to him this week. None of that comes up,” Eli said. “When I talk to Peyton, he does a great job of trying to keep me relaxed. (We) talk a little football and talk about New England some. He’s supported me this week. I know he’s just working hard trying to get healthy and I’m going to support him on that.”

While Eli would own two championships with a victory, to one for Peyton, Brady could tie his childhood quarterbacking hero, Joe Montana, and Terry Bradshaw with four. Coach Bill Belichick would equal Chuck Noll with the same number.

To get it, the Patriots (15-3) must protect their crown jewel. Four years ago, Brady was banged around so much by New York that it turned the Super Bowl in the Giants’ favor.

“We feel that we certainly have a very strong group of men in the front,” Giants coach Tom Coughlin said. “It’s just the way we play and prefer to play. It’s a pressure group, and we have played better in the back end as well, probably as a result of the ball having to come out faster than it has at certain times during the year.”

Brady certainly remembers the pain, physically and emotionally, from the beating he took on the field and the scoreboard.

“Any time you lose, it’s a tough thing,” Brady said. “We’ve lost one Super Bowl. I remember waking up in Arizona the next morning after an hour of sleep thinking, ‘That was a nightmare, that didn’t happen.’ After time, you learn to move on and get over it.”

The Giants got all over Brady again during their regular season 24-20 win at Foxborough, the last time the Patriots lost. That victory preceded a four-game slide, and New York eventually slipped to 7-7 before turning it around.

Adding to the juicy potential of a down-to-the-wire reprise of 2008, both teams barely made it to Indy. The Patriots needed backup cornerback Sterling Moore stripping the ball from Baltimore receiver Lee Evans in the end zone in the final seconds, then for Billy Cundiff to miss a 32-yard field goal that would have forced overtime.

The Giants went into overtime in San Francisco, using two botched punt returns by the 49ers to advance.

“We feel very fortunate to be here, and I’m pretty sure they do, too,” Patriots Pro Bowl nose tackle Vince Wilfork. “But we also know we deserve to be here, and they know they deserve it. We are two very good and very confident teams.”

Teams owned by two of the key figures in solving the 4 1/2-month lockout of the players last year. New England’s Robert Kraft shuttled back and forth from the meetings to his dying wife’s bedside late in the negotiating process. Myra Kraft passed away days before the lockout was resolved.

His players wore a patch with her initials MHK on the left side of their jerseys this season.

“The fact that she was so dear to me and all of our players are wearing her initials above their heart is an endearing thing,” Kraft said. “What she represented is important and I hope that special sense of spirit comes through.”

Giants owner John Mara played an equally important role in the labor negotiations, and when both teams reached the Super Bowl, Kraft mentioned “a certain karma” about the matchup.

“I’m not necessarily happy to be playing Bill Belichick and Tom Brady, I’ll tell you that,” Mara joked. “But yeah, I’m very happy for Bob because he put his heart and soul into those negotiations during a very difficult time for him and his family, so I think the success they’ve had is well-deserved.”

When they finally kick off Sunday, the two biggest stars will be Brady and Manning — yes, Eli. Not halftime performer Madonna, but the quarterbacks on whose arms, wits and leadership this Super Bowl will turn.

“They are both leaders on the field,” Wilfork said. “I think that position you have to be smart, you have to be intelligent. I think you have to understand what’s going on around you. I think both those guys have that.”

On Sunday, we’ll see which one adds to his championship legacy with another Super Bowl ring.