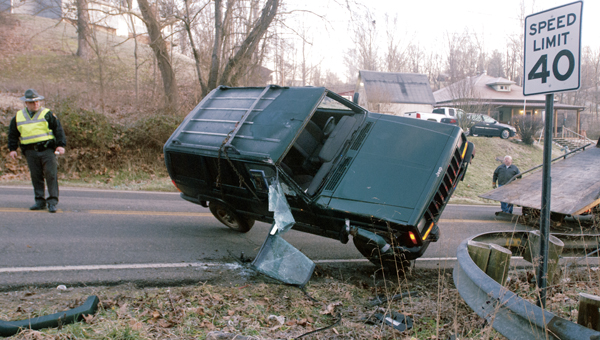 A three-car pileup at 10 a.m. Friday sent three people to the hospital. Ironton Patrolman Chad Artrip said a 1996 Chevrolet pickup truck operated by Charles A. Hannah, 18, of Greenup, Ky., was eastbound on Park Avenue when it struck a 1998 Ford wagon operated by Lawrence Gwilliams, 34, of South Point.

Gwilliams’ vehicle, which was northbound on Fourth Street, was then knocked into the path of a 1991 Chevrolet pickup truck driven by David Valentine, 51, of Ironton, which was westbound on Park Avenue. Valentine and two passengers in his truck, Andrea Crawford, 36 and an 18-month-old infant, Keith Crawford, also of Ironton, were all taken to King’s Daughters Medical Center in Ashland, Ky.

An accident at State Route 243 at 6:58 a.m. Friday sent four people to the hospital. Ohio State Highway Patrol Trooper Darrin Webb said a 1999 Jeep Cherokee driven by Michael B. Keating, 36, of Coal Grove, apparently slid on a patch of ice on the roadway as it began its upward climb at Zoar Hill.

The vehicle slid off the left side of the pavement, struck a guardrail and overturned. Keating and his three children were taken to a local hospital; the names of the children were not immediately available. Webb said none of the four were seriously injured. Keating was cited for failure to maintain control of his vehicle.

A third accident on State Route 93 shortly after 7 a.m. Friday involved one car and one deer. Ohio State Highway Patrol Trooper Randy Boggs said Ryan J. Bock, 26, of Kitts Hill, was southbound on State Route 93 at Porter Gap Road when a deer ran in front of his 2008 Mitsubishi Lancer. Bock was not injured in the accident and was not cited.