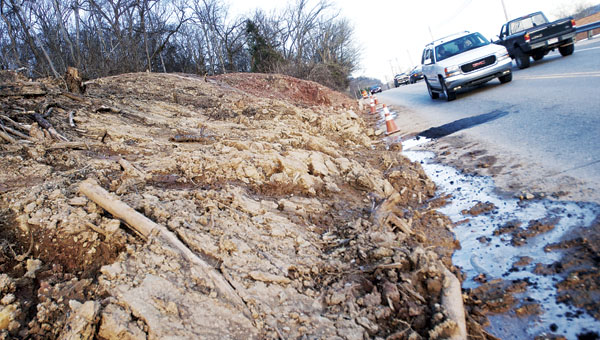 CHESAPEAKE — The Ohio Department of Transportation is taking comments from the public on any possible environmental issues that could come from the proposed slip repair project on Rockwood Avenue in Chesapeake.

“When we talk environmental, it is anything or everything in the environment,” Kathleen Fuller, spokeswoman for ODOT District 9, said. “It can be a house, trees, wetland, an historic structure. When they have to do the environmental scoping, this is what we are doing, who it affects and if it doesn’t affect anyone, we make that known.”

After the comment period, which ends on Feb. 16, the next step will be to put the project out to bid.

“We are hoping in March to be able to sell the project, but that is very tentative,” Fuller said.

For more than a year the Village of Chesapeake has struggled with keeping a section of Rockwood open as the hillside continues to slip down onto the roadway.

Since that road is State Route 7, it comes under the jurisdiction of ODOT. The repair design is expected to be a retaining wall built into the hillside similar to the one built along Rockwood downriver.

“For this particular job we are trying to get it through very quickly,” Fuller said. “It is possible to be sometime in March, but we don’t have a timetable.”

After the bids are taken, ODOT is expected to award a contract within 24 hours because the project is categorized as an emergency. Construction is expected to take up to six months with Rockwood Avenue down to one lane at times.

“We are just happy that they are fixing it,” Chesapeake Mayor Dick Gilpin said. “It is a project that is in a real difficult location and there is no other way around unless people want to go through Huntington. It is not going to be an easy situation. We are just having to manage it and do the best we can.”

CHESAPEAKE — One of the victims in a Chesapeake shooting Friday night has died. Christopher Radulic, 20, of 8308... read more