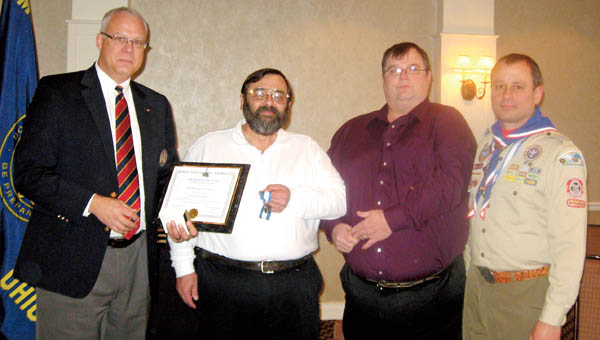 The Simon Kenton Council Boy Scouts of America celebrated the recognition of its newest Silver Beaver recipients at The Jefferson Country Club in Blacklick on Feb. 4.

The late Carl Colegrove was among the 13 recipients honored.

His sons, James and Ralph Colegrove of Ironton, accepted the award on his behalf.

“It was quite an honor to accept the award,” Ralph Colegrove said. “I was very happy to see him get awarded for all his work.”

Both of his sons have been committed scouters, making a difference in the lives of today’s youth.

Carl Colegrove has a long history of scouting. His experience as a Cub Scout set the path to become a Scoutmaster and Explorer leader in the 1940s and early 50s. He helped 11 of his Scouts earn their rank of Eagle.

“All the young men he helped, a lot of them turned out to be fine people,” Ralph Colegrove said.

He was awarded the Presidential Award in 1961 by the former Scioto Area Council and was the recipient of the Scouters’ Key, along with the Hornaday Award.

The Silver Beaver award is one of the highest honors a volunteer can receive at the council level. The award was introduced in 1931 and it distinguishes scouts who provide service to youth on the local level.

“He liked to make sure that boys had something they could do in the future, teach boys to be self reliant,” Ralph Colegrove said.

The National Court of Honor must approve all nominations before the award can be presented locally. Only people who have been nominated by their scouting peers are considered by the local council’s Silver Beaver Selection Committee.

The Simon Kenton Council serves more than 27,000 young adults with assistance of more than 8,000 adult leaders. They provide the scouting program to eighteen counties in central and southern Ohio, and northern Kentucky.