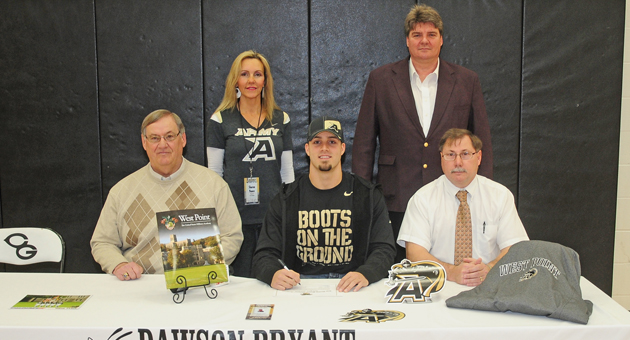 The Coal Grove Hornets’ senior All-Ohio fullback and linebacker accepted an appointment to West Point on Monday and will play football for the Black Knights.

“I’ve always had great respect for the military. I never really considered it until they knocked at my door,” said Bender.

“It’s something I can do that would be honorable. Academics have always been high on my list. When I went there the history was unreal.”

West Point doesn’t recruit by position, but they did hint that their plans were for him to play linebacker.

The 6-foot-1, 210-pound Bender was a second team selection in Division V. Bender not only led the Hornets in tackles but he rushed 139 times for 974 yards and 12 touchdowns in nine games. He was first team all-district.

“Everything he does he excels at. If they give him time, he’ll play football. He’s going to an academy that builds leadership and character. That’s what Greg has done four us the past four years.”

Bender also excels in track, something that wasn’t lost on the service academy. Bender was the Division III regional discus champion last year and runner-up in the shot put.

“They’re open to (track). I’ll have to compete for a spot,” said Bender. “They like guys who play football but also excel in track. They think they’re explosive.”

Bender is the son of Sharon Nance and Greg Bender.