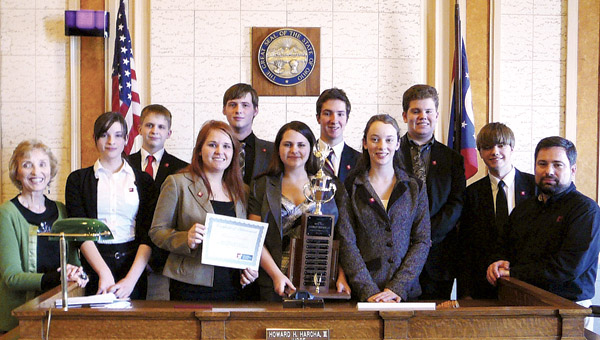 “We had a very good team and a very young team,” said attorney Mark McCown, who is the St. Joe team legal advisor. He pointed out that Eli Lutz and Ariel Porter are freshmen; Patrick O’Brien is a sophomore and they won their awards competing against high school juniors and seniors.

Each year the OCLRE creates a fictional case involving a constitutional issue. In this year’s case, a college freshman named Storm Jackson is accused of stealing prescription drugs while attending two real estate open houses and while visiting at the houses of two friends.

The defendant and his parents’ names were on a sign-in list at both of the open houses. Without a warrant, the police subpoenaed and obtained the man’s cell phone GPS records before he was arrested.

Storm Jackson has filed a motion to suppress claiming that the evidence seized was the result of an improper search and seizure that violated his Fourth Amendment rights.

The regional competition is Friday, Feb. 24. The state finals will then take place March 8 – 10 in Columbus.

St. Joe Mock Trial Team Coach Glenna McClain said she is always surprised and pleased with “how hard these kids work. Nobody knows the hours they put in. They practice two hours a day after school. And then they go in and conduct themselves with confidence and maturity,” she said. “It never ceases to amaze me how well these kids can do and they’re 14 to 18 years old.”