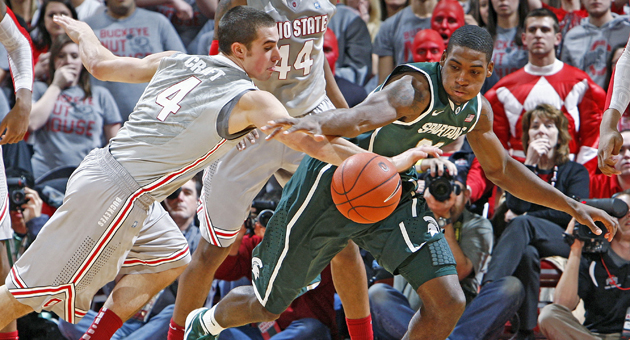 COLUMBUS (AP) — Tom Izzo is not a coach who likes to take his foot off the gas pedal.

But he did, and as a result, 11th-ranked Michigan State had more fuel in the tank.

“I told him the most important thing for us is going to be energy, trying to keep our energy level high,” Green said of his conversation before Friday’s workout. “Pretty much everything was just a walkthrough, knowing your assignments. That was really key for us.”

Izzo admitted giving the Spartans a light practice the day before a major showdown was “something I never do.”

“I knew we were just dragging because we had gone, like, 11 straight days,” he said. “I listened to my players. Draymond Green took care of (talking to his teammates) and it was just a focused walkthrough. Those kinds of things, they don’t come up on the stat sheet. Nobody understands. But that’s what leadership and togetherness is all about.”

“You have to give them a lot of credit. That’s what they hang their hat on — pressure defense and limiting us to one shot,” said Aaron Craft, who almost doubled his average with 15 points for Ohio State. “We got a little selfish and we were looking for our own shots.”

Swapping body blows and occasional buckets, the teams took turns making mini-runs in the second half. Ohio State pulled to 44-40 on a 15-footer by All-American forward Jared Sullinger, but Keith Appling, who had 14 points for the Spartans, hit two free throws and Derrick Nix coaxed in a baby hook to push the lead back to eight.

Payne then banked in a left-handed shot over Sullinger, before Sullinger was called for a charge to pick up his fourth foul with 2 minutes left. Next Green drove around Deshaun Thomas for a baseline layup to stretch the lead to 10.

“I thought we did a good enough job defensively to win the game,” Buckeyes coach Thad Matta said. “It all came down to our inability to put the ball in the basket.”

Izzo was happy with what he called perhaps his team’s best defensive effort of the year, but also said he was relieved that the Buckeyes continually misfired even when unguarded.

“Maybe they wore down a little bit, I don’t know,” he said. “They missed some 3s, a couple of open, open ones late that I’ve seen them make on a regular basis.”

Sullinger had 17 points and 16 rebounds but was just 5 of 15 from the field. Deshaun Thomas and William Buford, averaging a combined 30 points, totaled just 12 — each hitting just 2 of 12 shots from the field.

“I wasn’t expecting the double (team). Michigan State didn’t show that on film,” Sullinger said. “They had a great game plan.”

Nix, who had shared with Payne the responsibility for guarding Sullinger, was stunned when told Sullinger’s stats.

The Buckeyes were held 29 points under their season scoring average.

Sullinger said he and his teammates lost sight of their strengths.

Payne had a big game a year ago when the Spartans came to his home state and lost. This time the Dayton native was 6 for 6 from the field and also had four rebounds, two blocks and two steals.

A former AAU teammate of Sullinger and Craft, Payne was cheered by his father, brothers and cousins in a raucous rooting section behind the Michigan State bench.

“I just love playing here in my home state,” he said. “My family gets to come up. They don’t get to travel that much to get to all my games. So it means a lot.”

The teams meet again on March 4 in East Lansing, Mich.

Izzo praised the Buckeyes, despite their worst game of the season.

“I don’t feel any different than I felt a month ago, or six months ago: Ohio State’s the best team in the league,” he said. “But on this given day we were able to get them.”

By JIM WALKER Tribune Sports Editor   COAL GROVE — Just when it looked like things were turning bad for... read more