A millennium of memories 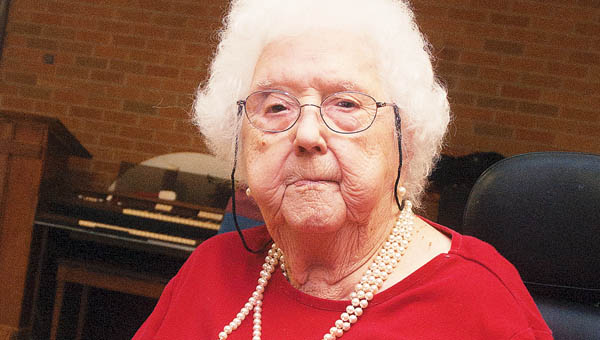 This month will mark the 102nd birthday of Ironton resident Garnet Fields. Fields grew up in Hecla and South Point.

Eighteen presidents, seven wars and 22 Olympic games. Garnet L. Fields has witnessed them all and is still creating new memories every day.

Fields, who lives at Jo-Lin Health Center, will celebrate her 102nd birthday on Feb. 25.

Fields thinks about the presidents who have taken office since she was born. President Roosevelt was her favorite and she says she dislikes President Obama the most.

“Roosevelt was a good man.He cared about people,” Fields said. “Obama is not a good man.”

Fields grew up in Lawrence County and she has lived in the area ever since.

“The Lord gave me a good husband, four good children, two of them are in heaven waiting on me,” Fields said.

Fields mother died when she was 5, so her grandparents raised her. Fields grew up in Sugar Creek Missionary Baptist Church.

Fields, born in 1910, was married for 66 years and her husband died at the age of 90. The couple had three boys and one daughter. The middle son and daughter are planning to celebrate her birthday, but Fields doesn’t know what is on the agenda.

Fields recalls being a child, riding in a horse and buggy or simply walking as the common mode of transportation.

“We always walked to school,” Fields said. “We were forced to wear long pant legs. On our way to school when we were out of sight, we would roll up our pant legs.”

Fields attended Pedro High School, where all of the grades were in a single schoolhouse.

“You only had to stay until eighth grade,” Fields said. “So after eighth grade, I went to work at J.C. Penney’s. It was my favorite job because of the discounts. I’ve worked several places.”

After they had a car, her family would drive into Ironton. Her husband would take the three boys to a show and she would take her daughter to Kline’s restaurant, Fields said.

Although Fields battled through pneumonia she is relatively healthy and active, participating in most of the organized activities at Jo-Lin.

Being givers of joy

Hospice agencies seek volunteers, emphasize job is about life The philosophy of any hospice is simple and well published: Giving... read more