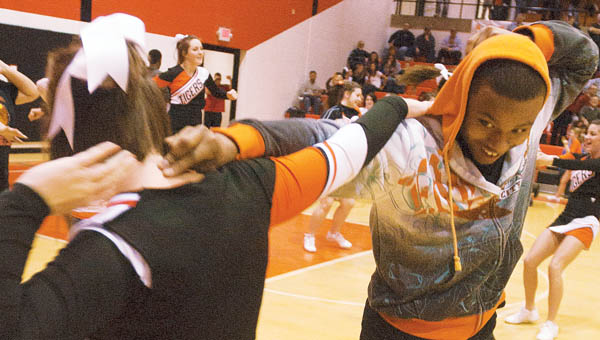 Junior Patrick Lewis and senior Abbie Crowe dance together to the song “Jump” as part of a Flash Mob Tuesday evening during half time at the Ironton boys basketball game.

Even the tiger was in on it.

What spectators thought would be an ordinary half time show at the Ironton High School boys basketball game Tuesday night turned out to be quite the opposite when 60-70 students rushed the gym floor at the Conley Center in a flash mob.

The “mob,” which included cheerleaders, band members and even the school mascot, danced to The Pointer Sisters’ 1980s hit “Jump For My Love,” which, as teacher Courtney Johnson explained, had a two-fold meaning: at a basketball game there is a lot of jumping; the “love” was a nod to Valentine’s Day.

The flash mob was the brainchild of junior Kylie Thomas, who explained, “I thought it would be really cool because it was unexpected and fun and dance-y and I love to dance.”

She had no trouble selling the idea to fellow students, who spent six weeks rehearsing.

“The juniors have wanted to do a flash mob for along time now,” J.J. Jackson agreed.

“We wanted to get people here to support the basketball team on the last home game of the season and do something fun,” Johnson said.

Watching from the sidelines was 10-year-old Briley Bond, who described the goings-on as “awesome.” She had no idea what was going to take place until it did. If she had the chance, she said she definitely “would want to be out there.”

Tyler Richendollar and Austin Stapleton were 10th graders who were somewhat out of breath but certainly smiling when they left the gym floor after the tune had stopped.

Richendollar said he did it “for the excitement of it.”

Would they do it again? Stapleton was emphatic.

Members of Ironton’s Hospice Quilters show off one of the quilts made on behalf of the residents of Community Hospice... read more