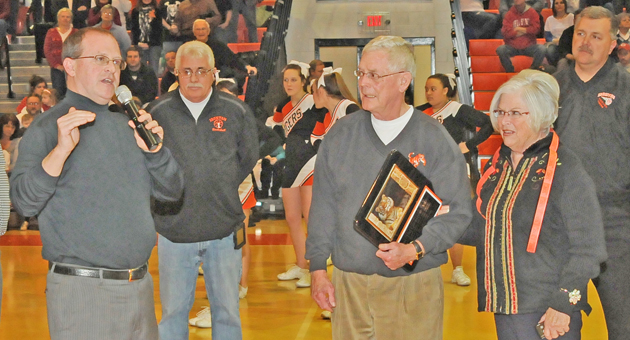 John Wolfe was honored for more than 40 years of service to the Ironton athletic department. Attending the ceremony were his wife, Jan (right) and his oldest son, Jay (left) who announced that a scholarship would be given beginning this spring in his name. (The Ironton Tribune / Tony Shotsky of Southern Ohio Sports Photos.com)

He’s a Wolfe in tiger clothing.

John Wolfe has spent a lot of his free time behind the scenes working with the Ironton Tiger Clan athletic boosters. In fact, for more than 40 years he’s performed volunteer service.

But Wolfe was forced out from behind the scenes on Tuesday and into the spotlight when he was honored by the Ironton High School athletic department for all his years of service.

Ironton athletic director Mark LaFon presented Wolfe a plaque of appreciation before the Ironton-Chillicothe game while surrounded by his wife, Jan, his son, Jay, and members of the Tiger Clan.

Wolfe’s other son, Doug, was unable to attend due to business matters.

“(John Wolfe) does somuch four our athletic department and he does it without wanting his name being recognized, but our kids know what he does,” said LaFon.

“Thank you from the Ironton athletic department for all you do.”

Jay Wolfe, athletic director at Olentangy High School, surprised his father with the visit. Jay remained hidden until the presentation.

Ironton has given the Jack Wolfe Scholarship award every year since 1970 in honor of John’s father. Jay said it will be a father-son presentation this year.

“Day, for all your years of dedication to the school, mom, myself and Doug are establishing a scholarship in your name to be awarded this spring,” said Jay.

John Wolfe was honored after the game with a reception at the Ironton Elks Lodge.

By JIM WALKER Tribune Sports Editor   McDERMOTT — For someone who hasn’t been to the dance the past couple... read more