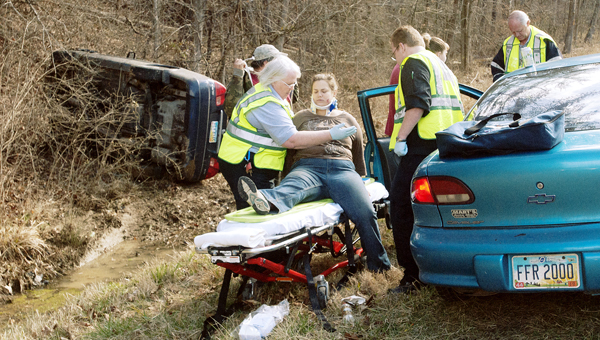 ELIZABETH TOWNSHIP — Five people were transported to area hospitals as a result of a two-car accident on State Route 93 Tuesday morning.

Trooper Darrin Webb said a black Pontiac driven by Jennifer Sparks, 19, of Pedro, was headed north and went left of the centerline. A blue Honda Civic, driven by Henry Kimbler, 65, of Ironton, traveling southbound on the roadway, swerved so far right it ran into the gravel. Kimbler then overcorrected and his car ended up in the ditch according to the OSHP.

Sparks was not injured.

According to Sparks, the Civic pulled out in front of her and she swerved into the ditch to miss the car.

Sparks was issued a citation for driving left of the centerline. The accident took place at 10:15 a.m.

One jailed, one hospitalized after Monday assault

One man is in jail, another is hospitalized after a fight early Monday morning. Ironton Police Detective, Capt. Chris Bowman... read more