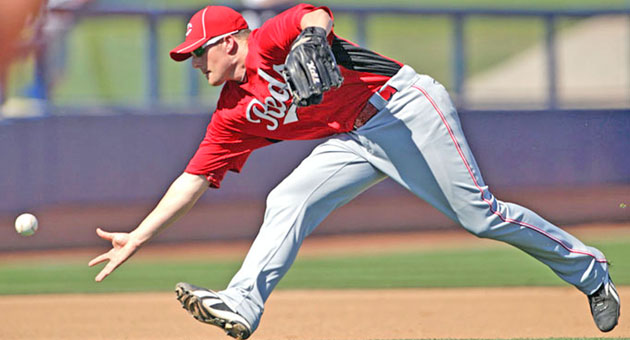 Cincinnati Reds’ shortstop Zack Cozart reaches to grab a ground ball during a game last season. Cozart has healed from two surgeries and is expected to be the starting shortstop this season. (The Ironton Tribune / Courtesy of the Cincinnati Reds)

GOODYEAR, Ariz. (AP) — Zack Cozart spent the offseason recovering from two significant surgeries, trying to get his elbow and ankle to work properly again. Now, he’s back to full health, ready to compete for the Cincinnati Reds’ shortstop job.

Cozart is one of the Reds’ biggest questions in camp because of his lack of experience in the majors and his offseason rehabilitation on his left elbow and right ankle. So far, he’s having no problems with what ailed him.

“I’ve been going hard at it for three weeks, taking ground balls, running. Everything feels good,” Cozart said on Thursday, a day before the rest of the position players report for camp.

The Reds have questions about the left side of the infield. Cozart tore a ligament in his non-throwing elbow while trying to make a tag and had reconstructive surgery in August. He also had his right ankle cleaned out.

Third baseman Scott Rolen is coming off surgery on his left shoulder last August. He and Cozart are expected to start if they have no lingering health problems.

Cozart was one of the Reds’ biggest surprises last season, playing very well in his first promotion to the majors. With Paul Janish and Edgar Renteria struggling at shortstop, the Reds called up Cozart on July 7 after he hit .310 at Triple-A Louisville.

He made an impact immediately, batting .324 with two homers in 11 games. In that 11th game, he tore up his elbow and was done.

Even though he had so few games in the majors, the Reds are giving him a chance to be the starter.

“He did well at Triple-A,” manager Dusty Baker said. “He wasn’t rushed through the system. He’s gotten better. I like his play at shortstop, his deceptive speed and relative power. I wish we could have seen him longer.”

Last spring, Cozart was among the last players cut because of his .394 batting average.

“Last year, my goal was to open eyes, to show (general manager Walt Jocketty) and Dusty that I could play,” Cozart said. “You can’t put too much stock in spring training, but I had a pretty good spring. I thought I made them at least think about it.”

When he hurt his elbow, doctors told him he would have enough time to heal for spring training.

“The elbow was harder to rehab, but I knew my elbow would come back 100 percent,” Cozart said. “For me, the ankle was more important. I didn’t want to get held back on defense, going side to side, stealing bases or anything like that. I couldn’t do any of that the way I wanted to.”

“Once the season started, it would bother me pretty bad,” he said. “It was something I could play through. But I wasn’t 100 percent the whole year.”

Baker will give him a chance to bat second in the order, the place he hit during his brief stay last year.

“It’s an important spot,” Baker said. “Age is a small part of the factor, ability, aptitude, unselfishness. That’s where the most unselfish player, the smartest player bats. You have to take pitches that could put you in the hole.”

By JIM WALKER Tribune Sports Editor   WAVERLY — Two stretches that totaled about six minutes proved to be all... read more