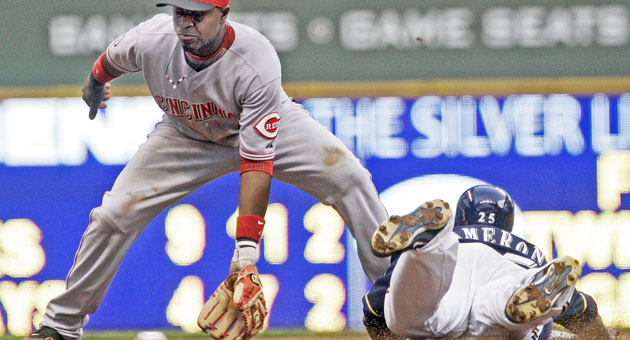 GOODYEAR, Ariz. — Reclining in his office before the Reds’ morning workouts, Cincinnati manager Dusty Baker gnawed on one of his trademark toothpicks and pulled a pair of red-and-white No. 12 wristbands over his forearms, looking much the way he did when he played.

Baker was relaxed, confident. Didn’t seem to have a care in the world.

And maybe with good reason.

“I feel like this is our year,” second baseman Brandon Phillips said Sunday. “We have the talent.”

The Reds failed to defend their division title in 2011, undone in part when an injury to starter Johnny Cueto and illness to Bronso Arroyo during camp dragged into the season and one-time MVP Joey Votto got little protection and had to carry too much of the offensive load.

Cincinnati finished in third place at 79-83, the Reds’ 10th losing season in 11 years

General manager Walt Jocketty was not going to let it become 11 in 12.

With holes to fill, particularly in the rotation and bullpen, Jocketty got to work in December. Not long after Pujols flew from the Cardinals’ nest and before Fielder donned Tigers stripes in Detroit, Jocketty risked a significant portion of Cincinnati’s future to improve the Reds’ present.

Next, Jocketty replaced closer Francisco Cordero by signing free agent Ryan Madson, who had 32 saves last season for Philadelphia. He signed outfielder Ryan Ludwick in January, an addition that will help the Reds’ depth.

The moves strengthened Cincinnati’s few apparent weaknesses, and signaled a belief this season can last deep into October.

“Hopefully, we’ll go to the playoffs and beyond,” Baker said.

To do that, the Reds will need to stay healthy, find a way to close the gap on the Central’s frontrunners and get a little lucky.

Although the Cardinals and Brewers enter this season missing their biggest bats, Phillips expects both clubs to come out swinging.

“With Fielder and Pujols not being in our division, I feel like those guys are going to be even hungrier than they were before,” Phillips said. “It’s not going to be a walk in the park. We still got to go out there and get as many wins as possible, but what we did this off-season was a great thing.

“We filled our gaps that we had been missing for quite a while. I agree with everything Walt and Dusty did to make this team better — and we have a good chance. I feel like we have no excuses this year. So as long as we go out there and play the game and do the right things, I can see us in the playoffs.”

Unlike past seasons, Baker doesn’t have to worry about facing Pujols and Fielder in multiple series. But he was quick to point out that the Reds will play an interleague set against Detroit, so there will be a few games spent in the dugout counting outs so he makes the right pitching moves to avoid Fielder.

“That’s what you do with all those big boys,” he said.

Votto is signed for two more seasons, but in light of the megadeals for Pujols and Fielder, some Reds fans are already worried about his future. The Reds have said they hope to open talks on a possible extension with Votto some time this season.

After reporting to camp this week, Votto made it clear that he’s focused on this season — and this season only. Any contract speculation is just that.

“I’m going to make it pretty simple for just about anybody,” said Votto, who signed a three-year, $38 million deal last year. “I’m going to leave all that to the Reds front office and my agent and myself. I will try to keep it as private as possible. I don’t think it’s fair to the fans. I don’t think it’s fair to myself. It’s certainly not fair to the team for any of that type of stuff to creep into the season and become a distraction.”

Phillips’ situation is a bit different. He’s in the final year of a contract that will pay him $12 million this season. He’s open to signing a long-term deal with the Reds, but said he won’t get involved in any negotiations unless he’s asked. He said Sunday that he hasn’t heard anything from his agent since December

“I’m just out here trying to play the game and do what’s best for the team,” he said.

Phillips likes where he — and the Reds — are sitting.

The Central title is up for grabs, and Cincinnati just might be the team to snatch it.

“It’s all about us putting everything together and staying healthy,” Phillips said. “If we do, we can win it.”

Baker believes it, too, but he won’t say so.

Entering his 19th year as an NL manager and fifth with the Reds, he knows not to count on anything until the games begin.

St. Louis and Milwaukee might look different, but looks can be deceiving.

“It’s still going to be a good race,” he said. “Right now, everything is on paper. I’m more confident on paper.”

The Associated Press   COLUMBUS — A lot of coaches would go ballistic if their 6-foot-10 center stepped outside and... read more