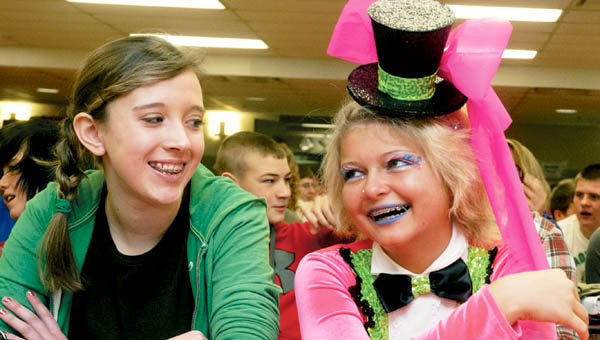 ) Rock Hill Middle School student Lily McGinnis, right, is dressed as “Effie Trinket” from “The Hunger Games” as she talks to her friend Samantha Dillon Friday.

ELIZABETH TOWNSHIP — Normally Rock Hill Middle School Teacher Denise Fraley is, well, Denise Fraley. But on Friday, she donned a riveting purple wig and a costume and became “Effie Trinket.” Some of the kids were in costume, too, as “Katniss” and “Haymitch” and “Peeta,” all characters in a series of books called The Hunger Games, by Suzanne Collins. The eighth grade students have been reading those books.

Principal Mick Hairston said the book has been wildly popular among the students and has encouraged some children to become readers and those who were already avid readers to read even more.

When the KYOVA Mall in Cannonsburg, Ky., invited area school districts to participate in a special showing of the movie, RHMS had an essay contest to pick two students from their school to attend. The winners were Sarah Kidd and Alex Nance. Fraley said she is very pleased with how the book inspired the students to write.

“Some of them were so good they brought tears to Mr. Hairston’s eyes,” Fraley said. “They (the essays) were that good.”

The winners were announced Friday when the school had a Hunger Games Day. Students were encouraged to dress up as one of the characters. Timmy Boggs and Jeff Ellis each came dressed as “Haymitch Abernathy”, a middle-aged former Hunger Games survivor who must teach the kids from his district everything he can about the fight. Why did Boggs choose “Haymitch?”

“Because he was a good character,” Boggs said. “And he learned to fight with a knife.”

Ellis said he chose “Haymitch”, “Because of his prudence toward ‘Katniss’ and ‘Peeta’ and because of his behavior in the movie.”

Sarah Kidd came dressed as “Annie “because Annie’s boyfriend was Kidd’s favorite character in the book.

“I loved the romance, the action,” she said. She has read all three books in the series.

The two students with winning essays got tickets to the KYOVA premier event, a tee shirt and a $10 gift card to Callahan’s restaurant. The rest of the eighth graders will attend a daytime showing of the movie March 23.

Zumba for a cause

Ten-year-old Breana Graves of South Point loves to wear the color pink from the trim on her tennis shoes to... read more