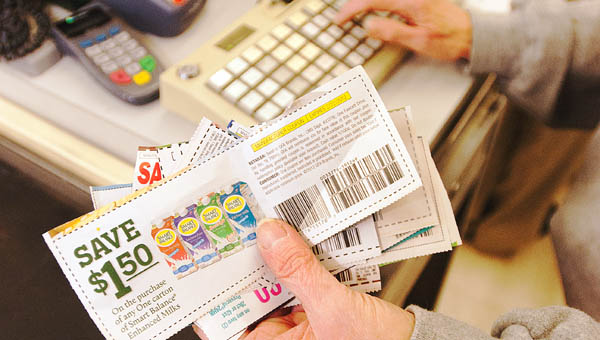 Carla Salyer is a retired home economics teacher. She said coupons are one of many ways shoppers can save money at a time when no one seems to have enough to make ends meet.

Normally when shoppers line up at the check-out counter, they open their wallets and take money out to give the cashier. But, occasionally, Emily Scott, of Pedro, waits with a smile as the cashier gives her money.

And no, it’s not the change back from her purchase, exactly. It’s the results of her hard-earned work cutting coupons and comparing prices, work that helps keep food on the table and money in her pocket.

Scott is one of a growing number of power shoppers who use coupons to stretch their dollars and purchase what they might not if they were only using cash.

Carla Salyer is a retired home economics teacher. She said coupons are one of many ways shoppers can save money at a time when no one seems to have enough to make ends meet.

Both Salyer and Scott have creative ways to take the pinch out of penny pinching.

Scott began couponing in earnest in the summer of 2011 when she lost her job and decided to try the idea to save money. The coupons come from newspapers, the Internet and anywhere else that will give her a break on the price.

Kroger once offered an item two for $4. Scott took the deal but had coupons that not only allowed her to get the items for free. She actually made $2.

“If you can find coupons for items that you normally buy and it saves you money, then you should,” Salyer said.

She cautioned that buying an item you don’t normally use but is on sale is counterproductive. You end up spending money for something you can’t use, so you actually spend money for no good reason.

Salyer said she wishes there were coupons for fresh meats and vegetables — items that can be more expensive to buy but are healthier.

Scott said she has found another way to save money. Some stores such as Walmart offer price matching. They offer to match any competitor’s price for the exact same product.

Scott actually made money on Aveeno body wash once. The ad allowed her to buy lotion and get a lipstick free. But she had a $2 off coupon for the lipstick and a $3 coupon for the lotion plus the coupons had no size exclusion. She purchased the smallest size bottle of lotion and used the coupons to do it. In the end she got $10.94 off the total cost of the two products which only cost $3. So by the time she subtracted coupons, she actually made $7.

“One time I did really, really, really well,” Scott recalled. I went to Walmart and price matched. I think I spent $8 and the total was (supposed to have been) $400. I was there several hours.”

Go with a plan

Salyer said planning is the single best thing a person can do when shopping for food. She said often we get in a hurry, don’t plan meals, don’t plan what we need to buy to make those meals and wind up buying things we don’t need or use and not buying things we could have used. Her advice: Make out a menu and purchase what you need to make the items on your menu.

“Stores give this a lot of thought,” Salyer said. “You come and they are prepared for you. Sometimes they know you better than you know yourself. They pay psychologists and others to figure out for them what shoppers are thinking.”

Her advice: Go to the grocery store armed with a list when you are neither tired nor hungry.

“You used to hear people say, ‘Don’t take the kids.’ But anymore I don’t think that’s true. When you take them, you teach them what to buy, how to buy,” Salyer said.

In other words, this can be a learning experience.

Salyer said the wise shopper will read the unit price, usually on the front of the shelf with the price tag. The unit price tells how many cents or dollars that item costs per serving or per use. Shoppers then can compare one item against another to determine which is the better buy.

Salyer said, when shopping, look for items you normally use that are on sale and buy them in bulk, if you have the room to store them. Meats are an example, she said. Large packages of chicken breasts on sale can be divided into smaller packages and frozen for use later.

The same thing applies to vegetables in season. Purchasing, say, green peppers in the summer when the prices are low and peppers are plentiful makes sense because peppers can be frozen and used in the winter when the price of fresh veggies is naturally higher. Salyer said staples such as flour and sugar are good choices to purchase in bulk if you have the room to store them.

One of the biggest complaints of working moms is that they are often so tired at the end of a work day it’s hard to come home and get dinner on the table.

Salyer said the slow cooker is a friend to the busy family, allowing meal preparation ahead of time. Cheaper cuts of meat usually tenderize nicely when slow cooked, making them a better choice to purchase.

While some shoppers may reach for prepackaged food to save time, Salyer said making food from scratch usually saves money.