PROFILE 2012: Picking up the pieces 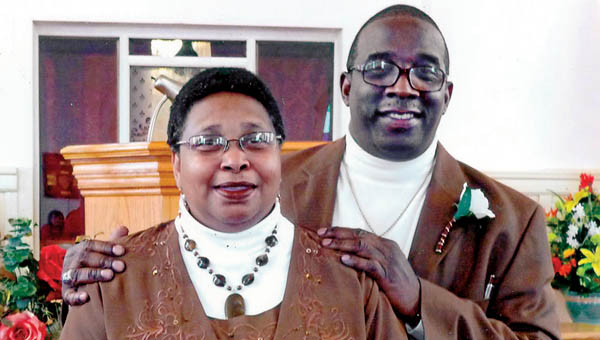 Dianne and Michael Thompson inside their church.

IRONTON — It was more than six years ago that Dianne Thompson boarded a northbound bus in Baton Rouge, La., with her daughter, Johndra Patterson, and granddaughter Jonasia Segrow. The trio was fleeing the devastation of New Orleans following Hurricane Katrina and was desperate to escape the atrocities they had witnessed in the aftermath of the storm.

“My daughter said ‘Let’s get on the bus and go Mom,’” recalled Thompson, this past December. “She convinced me to sign the papers and get on the bus. And that’s how we got out here. I had never been up north in my life. I really was in shock of the hurricane itself and the devastation.”

“I still had sanity to what I knew what I was doing, but I was in shock. So much had happened. I don’t think I had taken it all in when I got on the bus. We didn’t have nothing, just the clothes on our back. So why not try it? I asked them, could we come back if we didn’t like it out there? They told us yes, they would pay for us to come back.”

The trio believed they were headed to Kentucky.

“But this is where the bus dropped us off, right here and I’ve stayed right here,” said Thompson from the couch of her 10th Street apartment in Ironton, where the family has lived since arriving in September 2005.

“When I got here, I liked it. I didn’t want to go back,” Thompson explained. “It was quiet. It was a lot of quietness. We didn’t hear any gunshots. We didn’t hear any police sirens every hour or so running. (There was) Anybody on the corners, and fights. It was just a lot of stuff that was going on in New Orleans that was much different than here.”

“I liked the serenity. Now my kids tell me its because I’m older. I like the serenity of Ironton because it is quiet and peaceful. There is nothing for the young people to do, but for me, I love it.”

Before the storm, Thompson and her family lived about 45 minutes east of the heart of downtown New Orleans, between the lower 9th Ward and the I-10 “high rise” bridge over Lake Pontchartrain to Slidell, La. The area took a direct hit from the Category 5 storm as it moved inland from the Gulf of Mexico on Aug. 29, 2005.

In the days before the storm intensified, the Thompsons had planned to ride it out in their home as the family had always done before. But when the storm was forecasted to strike Slidell directly, Thompson said the family decided to evacuate their home. They stayed at the hotel her husband, Michael Thompson, was working in at the time.

“When the levee broke we had to the leave the city,” said Dianne, noting it was not before they witnessed the chaos that erupted in the city.

Emotions still run high when the family discusses what they saw. They describe looters ransacking stores, people fighting over diapers and food, the scene at the Super Dome. Six years later, some images are especially vivid and hard to talk about.

A few days after the storm, the family was shuttled from New Orleans to Baton Rouge in the hotel’s vans. They first stayed with Michael’s family members but later the women moved into a shelter where they eventually boarded the bus to Ironton.

Dianne believes God had a hand in putting her family on that particular bus.

The generosity of the people of the Tri-State is unlike anything the family has experienced before, said Dianne, giving them the feeling this is where they were meant to be.

“I have never seen giving people like I’ve seen out here, in Ironton,” she said. “We didn’t know what we were coming to. When we got here our house was furnished. We had TVs and phones. They brought in washers and dryers. They went and got us tables. They got everything. The sofa, the lamp… bedroom sets — all set up. Pillow shams, comforters, they were made,” Dianne says, pointing out the furnishings that remain in the family’s home.

“It’s unbelievable how they had it. They had us set up with cable, phone service with long distance to call home. They paid it for three months! It was like a dream, it was like something out of the television. It just wasn’t real to me. I kept saying ‘Thank you, Lord. Thank you, Lord,’” she recalled.

“I’ll stay forever. I’m going to stay here. I don’t plan to go anywhere. God couldn’t have placed me in a better place.

“I just thank the Tri-State area, the people that helped my family and I to get back on our feet. I will never forget them for that. I don’t know where I’d be at, if I had never got on that bus and came out here. They just put me back on my feet. They brought me back to be stable again,” she said.

The family’s home had not taken on water during the storm but was destroyed by mold and mildew that took over in the days after. They lost everything.

“I know a lot of people who went through Katrina and some of them are still not right. Some of them still don’t have them back on their feet. These people out here, they gave us cars and computers when we came out here. That was enough to get you situated. I got a job. My other daughter, she got a job,” said Dianne.

Thompson and the couple’s son, Michael Jr., joined Dianne and her daughter and granddaughter several weeks after they first arrived in Ironton. Michael Jr. graduated from Ironton High School the following year and her husband, an ordained Baptist minister, was called to pastor Mt. Moriah Baptist Church in Middleport in 2007.

Before being called to pastor, Michael was still encouraging his wife to return to New Orleans, she said. That is no longer the case.

“God has placed me here, so these are my orders,” Michael says. The congregation is small but devout, according to the couple.

“That is a blessing there right by itself. I don’t think God could have given us a better church,” Dianne said.

Patterson and her daughter no longer lives in Ironton, they relocated to Bradenton, Fla., and Michael, Jr. plans to move to Atlanta upon his graduation from Ohio University Southern next year.

But Mr. and Mrs. Thompson have no plans to leave — ever. The couple say they continue to be shocked at the outpouring of love and assistance the Tri-State has shown them.

Last year, Mrs. Thompson was diagnosed with stage four lung cancer and underwent chemotherapy and radiation treatments. Local churches teamed up to hold a fundraiser to cover her medical costs —the family had no health insurance — and Ironton school district employees have donated scores of sick days to Dianne Thompson so she could continue to be employed in order to qualify for disability, in addition to donating cash for medical and other living expenses.

The community also showered the family with prayers and support through the hundreds of cards they have sent during and after her cancer treatment. At one point the walls of the family’s living room was completely covered with cards, Dianne recalls.

“It sounds like a fairy tale, but it’s true,” she says. “The people in general are good people. I have never met such giving people.”

Mrs. Thompson finished up her treatment last year and says she feels great.

To call the recent announcement of possible construction of a steel mill along the Scioto and Lawrence county border a... read more